Clive Barker: Imajica and The Thief of Always

This is the monumental fantasy work that presents Earth as one of five parallel Dominions. It's quite a cult classic among the initiated!

The other four Dominions are already "reconciled" and the novel presents the journey made by one art dealer, Gentle, who comes to understand that he is somewhat of a Christ figure whose mission is to "reconcile" Earth with the other Dominions. 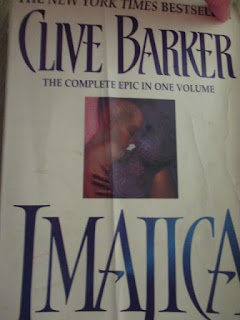 What happens when a world is "reconciled?" That's a good question. For one thing, people (and creatures - Barker is quite an admirer of evolutionary fecundity) and pass freely (using "magic") between Dominions at specific points. More important, the Dominion comes under one political and religious system (something like a Gaia). Nation states disappear, and personal lives seem to settle down into a minaturist fashion.

Early in the story, the bisexual Gentle is carrying on a love affair with androgynous (but at the beginning male) alien assassin Pie'oh'Pah. During the story Pie turns into a woman on him, but he doesn't care. He stays in love. Then Pie transforms into an alien something else. Barker's "intimate" scenes - both between species and "normal" heterosexual ones (also between Gentle and heroine Judith Odell) are among the steamiest and most passionate I've every read. Another gay male character dies of AIDS but comes back to life - quite redemptively and charismatically - during the Reconciliation.

About one third the way into the novel, Gentle and Pie start their adventure across the Dominions (in reverse order). They are fascinating to read, but after a while I began to feel they were somewhat artificial places. The 4th, 3rd, and 2nd all have a variety of landscapes expected say in California. Climates tend to be warm and dry. There are deserts, savannahs, waterways, islands, cities built like temples on mountaintops, an holy places built as towers. Skies are oddly colored and may have multiple suns. The smaller villages are interesting, as the people seem to live countrified, simplified lives as if ordered to do so by higher authority. In fact, the people (who can vary enormously in appearance, as women as well as men sometimes look like apes) seem stuck in time. In fact, the Dominions all seem stuck in time while the ruling Angels (for want of a better word) fight for control with God himself. There are battles and fights that would befit a computer game. Yet, one comes away with the feeling that the Reconciled Dominions are rather limited, fixed places, something like what a child might construct for a model railroad. One wonders if there are really whole planets and solar systems (somewhere in some universe) to support them.

There are many memorable and vivid descriptive narrative sequences, such as when Gentle stands on the platform of a train station in the Third Dominion and suddenly becomes ill, vomiting on the rails, after contemplating his meal of a fish within a fish within a fish. The writing makes the reader really experience what the characters feel. Barker is one of the world’s greatest fiction writers in his ability to metaphorize narrative.

The final showdown with God in the 1st Dominion, however, is a tour de force.

Done well, Imajica could make a terrific, visionary movie (the MPAA rating could be an issue). Imagine Di Caprio as Pie'oh'Pah and Jack Nicholson (or maybe Patrick Stewart or Michael Rosenbaum) as Gentle. I can see it as a compelling two-part serial or franchise (“The Fifth Dominion”; “The Reconciliation”) for New Line Cinema to follow “The Lord of the Rings” and it wouldn’t be a problem to recover the $150 million it would cost to make. The final showdown with Hapexamendios (who plays him?) in the crystalline "City of the Unbeheld" (putrefying under “rococo rains”) would outdo the ending of 2001. (Heaven apparently looks like a Hong Kong of high rise condominiums, however fingerpainted.) But Barker should have provided some bookmarks for his readers. Helpful would be a list of characters (there are so many of them), titles for the chapters and a table of contents, and particularly some drawings (Barker, after all, is a painter as well as author and movie director) and maps of the Imajica. (At one point Barker even says nobody has ever mapped Imajica, but that sounds like a copout. Barker must do this himself.) Harper could publish a revised edition with these materials. Or developers could build a resort in Las Vegas based on the Reconciled Dominions, and outdo the Bellagio; think of the Nsync shows.

Barker's “Chinese Puzzle” fantasy, though, still comes across as "tempting." Imagine, if you will, a journey through the other Dominions with a loved one, or with somebody you can't "have" in real life. And maybe, just maybe, Barker's theology will turn out to be "right." Indeed, as the book’s cover brags, our way of looking at reality changes forever, as well as at the afterlife. Yup, Man beats God. Get used to it. Real life matters.

There’s a particularly relevant cultural interpretation to Clive Barker’s concept of “Reconciliation” – that is, that cultures existing separately come into contact and have great effect on one another. Since this book was published in 1991 and probably written in 1989 and 1990, it certainly looks forward to the modern idea of globalization, particularly abetted by the broadband Internet. Sexual cultures are reconciled, too. Sex is no longer just a “private choice” when its meaning can be broadcast so quickly across all Dominions.

The idea of separate dominions becoming reconciled comports well with the modern physics string theory “of everything” as documented on the PBS/Nova documentary Elegant Universe, narrated by a youthful Brian Green. Bridging the gay from the physics of the large (Einstein’s general relativity) to the tiny led eventually to theories that apparently demand parallel universes, and one can “reconcile” them (cross into unseen dimensions) by contact with the “branes.”

A separate two-volume edition by Harper contains an essay by Barker explaining the “absurd ambition” of his Mahlerian masterpiece. Barker is given to diversions into philosophy, as the very first paragraph gives a philosophy of drama that seems to set up Shakespeare.

The Thief of Always (1993, Harper Collins, paper, ISBN 0061091464) is a well-known “children’s” novel. Ten year old Harvey is bored to death and fears he will die if he doesn’t have more fun. So a stranger invites him to the Holiday House, where he can celebrate every holiday (most of all Christmas) and experience all the seasons every single day. Pretty soon, he has to run for his life. Reports are that some kids consider this book “too scary.” There are rumors of an animated movie of this, but I haven’t seen it yet. It ought to get funded and made.
Posted by Bill Boushka at 8:14 AM