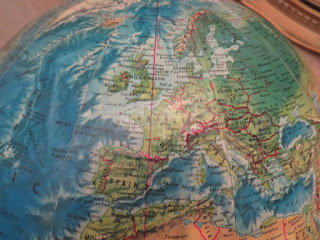 Mark Pietrzyk: International Order and Individual Liberty: Effects of War and Peace on the Development of Governments

On a snowy day before John F. Kennedy’s 1961 inauguration I (as a high school senior) wrote an essay midterm exam in a Virginia and U.S. Government class at Arlington’s Washington-Lee high school on the question “Compare communism and democracy.” The World Book Encyclopedia has a three-column comparative government study comparing democracy, communism, and fascism.

Reviewing a social studies dissertation is a bit different from reviewing movies, but I always like to start with a value-adding personal context for the political theories that will follow.

In the war on terror, conservative columnists have been drawn away somewhat from the usual bickering over social mores and even resistance to public funding of social programs to enunciation of what is missing from the Arab world as well as much of the Third World: something like “liberal capitalist democracy.” (Okay, I adopt the tone for this review of a columnist for The Washington Times.) And, yes, this form of society is the most successful. It incorporates, besides the United States, all of the British Commonwealth, western Europe, some of the Pacific rim, and a few other bright spots like Turkey and even India. It is much weaker in much of South America, Africa, and the rest of Asia. It can produce the best in people. How many gifted younger adults (including at least three with dual citizenship) have I met from (besides the U.S.) Canada, Britain, Germany, Spain. I once met (in the Connection Disco in Berlin) a graduate student who had been born in East Germany but had been lucky enough to grow up in Britain. None of my friends could have lived their lives had they been brought up in places like Iraq, Iran, Afghanistan, North Korea, even Pakistan.

All of this pertains now to the current Bush administration’s “nation building” in places like Iraq and Afghanistan, and the determination of enemies to retain local chaos. One comment made over and over again is why the Muslim world fell into social and political despair after the glories of its civilization 1000 years ago, and so much of it has to do with basic corruption of political processes. It seems like an underlying concept is nihilism, a desire by some people to maintain a religious definition (“from Allah”) of the pecking order, of who is better than who.

This book is based on a Ph. D. dissertation written by the author at The George Washington University and the Brookings Institution. I know the author, but I will defer here to his own presentation of himself at http://www.internationalorder.org/author.htm.

The point of the book is the degree of nexus between democracy and peace. The book is in two parts: “The Theoretical Controversy” and “Case Studies.” On the political theory, the author disputes conventional wisdom that democracies are always by nature inclined to make “a separate peace” (perhaps a pun on the John Knowles novel and 1972 movie). Some of this has to do with the way we characterize democracy itself. The author provides a key chapter “How Peace Facilitates Democracy.” The case studies are the American Revolution, the French Revolution, the Transformation of Germany (from the Versailles treaty through Nazism to the post World War II democracy in the west and finally in a unified Germany), and especially “Israel, A Militarized Democracy.” The particulars of his analysis get interesting. For example, on page 45 he talks about the various city-states in ancient Greece (the Peloponnesian Wars, as in the upcoming movie Troy) and takes a more critical view of Athenian democracy than did the PBS documentary series The Greeks. Israel is particularly critical: it has maintained a viable democracy because of its intense cultural and religious cohesion, and strong socialization. It has recognized some fundamental rights for resident Palestinians and non Jews but it has flagrantly violated what we see as property rights with its takings. (Ironically, Muslim Spain around 1000 AD had somewhat similar relationships with non Muslims living there.)

What is more controversial for me is the double-edge attitude that libertarianism takes towards democracy. Many libertarian commentators point out that the founding fathers really did not intend democracy as we know it today, but rather wanted to protect their property rights from the British (and the slaves). Democracy seems to invite “tyranny of the majority,” except that is why we have separation of powers and a strong judiciary. An associated concept is “market fundamentalism.” The underlying ideology is freedom to direct one’s life and choose how to deploy one’s property, assuming no aggression against others and a rather narrow view of personal accountability. But society has to deal with unfairness on a macro-scale, some of which comes from external events (interaction with other countries) or may be inherited from the past, so democracies give governments the prerogative to tax or regulate citizens to meet the needs of various groups. The objection to seeking social justice this way is that it invites corruption, and intellectual shallowness and constituents give money to politicians to get their way. A free society has to figure out how to get individuals to balance meeting their own ends with a collective need for productive socialization.

Dr. Pietrzyk also provides online an essay “The Idea of a Democratic Zone of Peace: Origins in the Enlightenment” Particularly interesting is the pertinence of the ideas of German philosopher Immanuel Kant and the 1795 essay “Perpetual Peace.”

Mark recently commented on "The Great War in America" by Garrett Peck, to note that a superpower needs to provide continued leadership after a war (relative to the failure of the League of Nations?
Posted by Bill Boushka at 5:45 AM