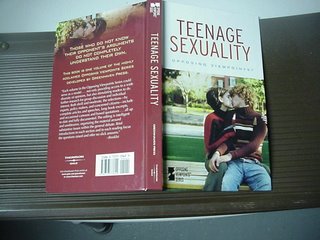 Greenhaven Press, (Thomson Gale) in Michigan, offers a series of books and papers called The Opposing Viewpoints Series. The link given here is a pretty complete list. The series slogan is "Those who do not know their opponent's arguments do not completely understand their own." Elsewhere, I have suggested that this approach to presenting arguments ought to be developed into a database and offered as educational software.

In 2006, I had a contribution published in Teenage Sexuality: Opposing Viewpoints, edited by Ken R. Wells. My contribution is "Homosexuality Should Be Discussed in High School," on p. 183. This is the first publication of something by me in a book that was published by an independent third party. The opposing viewpoint has a "not" in the title and is by Linda P. Harvey. Various other essays concern the effect of the Internet on teens, age of consent, and whether unwed teens with kids should marry.

The Library of Congress Table of Contents is at this link.
The Amazon link for purchase is this.
Posted by Bill Boushka at 8:27 PM