Bulletin of the Atomic Scientists 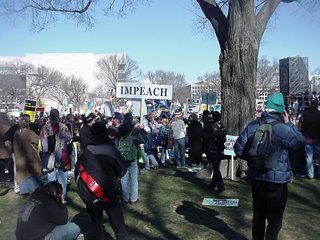 On the way to an art movie today in Washington, I found at the nearby Barnes and Noble a copy of the Jan-Feb 2007 "Bulletin of Atomic Scientists." The main website is this.

The Bulletin considers us to be perched at five minutes to midnight.

Some specific contributions need to be noted. An essay "Genesis in Reverse" by Jonathan Schell mentions horrific but theoretical scenarios for ending mankind gradually, such as the idea that a virus could wipe out all male sperm. This sort of scenario plays out in the recent film Children of Men.

Martin Rees (author of Our Final Hour, 2004), in a piece called "Grounds for Optimism" discusses asymmetry and the danger that even one malevolent individual could pose to all of civilization. "We're kidding ourselves if we think that technical education leads to balanced rationality....There will always be disaffected loners in every country, and the "leverage" each can exert is ever growing. The global village will have its global village idiots." And I guess such an "idiot" is not so innocuous as the Cobbler in the opening scene of Shakespeare's Julius Ceasar.

John P. Holdren ("The Sky Is Falling") argues that proof of global warming from human fossil fuels can be seen from warmer winters and differential warming at high latitudes, and warmer nights.

Freeman Dyson's "Freedom of inquiry" has the subtitle "a more open world is a safer world," and he argues his case. He gives some chilling examples of ideas that fortunately (given today's "asymmetry") did not pan out, such as a theory that a "nuclear grenade" could be made using fusion instead of fission. Because of the horrific possibilities that certain technologies pose in the wrong hands (these technologies ranging from nuclear, to bioterror, to computer worms) there is a natural tendency to start thinking about "licensing" access to or publication of knowledge, an idea that libertartians would detest. There has be a tendency for all the "free entry" to lead to a culture of "infotainment", leading to superficiality (but I would disagree; the best "new" material will tend to find an audience anyway.) We do need new paradigms for personal ethics, brought down to the individual level, a sort of "pay your dues" system or mandatory interpersonal accountability (beyond today's ideas about marriage) perhaps; but it would be very difficult to enforce such a system politically without corruption from those in power, whether on the political left or religious right.
Posted by Bill Boushka at 2:41 PM