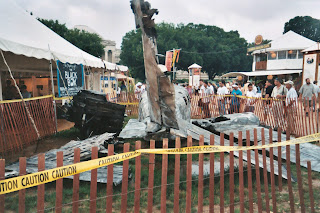 This is Mr. Nader's seventh book, of which is most famous is Unsafe at Any Speed. I purchased it at a book-signing party at Landmark E Street Cinema in Washington DC on Feb. 23, 2007 after a screening of the new film from IFC/Red Envelope, An Unreasonable Man, review here. His autograph included the epigraph "for the children."

Robert Schuler, as pastor of the Crystal Cathedral in Garden Grove, CA once said that the most important example is "tradition." I won't name all seventeen traditions, but some of them include "listening," "the family table" "discipline", "work", "business", "patriotism." On the
"listening" tradition I am reminded of the penchant for English teachers to give listening quizzes (on videos or CD lectures) as well as reading quizzes.

The overall tone of Nader's exposition here is traditional western values of work, family, and freedom, and self-discipline, as all interconnected. Most of this could have been written by a so-called "social conservative." But really, most of it is common sense and not that controversial in itself.

Nader does give a history of his family, immigrant from Lebanon, Christian, although this raises the likelihood of Islamic ancestors, which itself would be a meaningful observation. He has a brother and two sisters, and his parents, who both lived healthfully into their nineties, balanced tradition values of the family unit with the ability of kids to go their own independent ways. That does not always happen with "family values" but in his own life it did, as he spent his life as a "geek lawyer" famous for his causes, without every starting his own family for a biological lineage of his own. That's curious enough, as he says in the film that he does not care about his "legacy" (especially in light of the 2000 elections) as air bags will not be taken out of cars.

He does talk about the family dinner table and the socialization, the chores and sharing of adaptive responsibility. The kids did not have much TV (he was born in 1934, which makes him 73 now, and he grew up in the era of radio), and they learned the adverurous pleasure of outdoor games. (In the 1950s, I invented "backyard baseball" with outfield "fences" and special rules, and that became a lifestyle for a while.) The family had to pull together after Hurricane Diane flooded the family business in Connecticut in 1955 (he gives quite a bit of history, which may be interesting in light of Katrina). His father encouraged independent, critical thinking skills in all of the kids, and had his own theory of fairness: wealth accumulation should be limited or taxed, so that rich people would give more -- although you have to say that Bill Gates gives a lot for AIDS and plows what he makes back into more innovation. (By the way, Bill Gates offers a worksheet for teens about work ethics, the last point being, "expect to wind up working for a geek").

There is a curious dichotomy: a book that stresses family solidarity, written by a man who did not create his own biological family. Of course, I have the same kind of track record myself with my own past and my own books (Do Ask Do Tell...) Nader sees corporate corruption and influence peddling as the main evil confronting families. We are left to ponder, for ourselves, the way burdens (like eldercare) should be shared by individuals.

Nader announced on Meet the Press this morning that he would run for president as an independent in 2008. Cross-reference link.
Posted by Bill Boushka at 3:34 PM

Hints at "Islamic roots"? Come one! The Christian church has deeper and longer roots than Islam! Read up on your history of the Middle-East before you try to paint someone with an obviously biased brush!