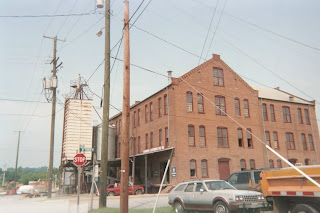 It’s not too often that I discuss textbooks in the Book blog, but the Advanced Placement world history text World Civilizations: The Global Experience (5th Edition, Longman, most recently published in 2006, ISBN 0321409841; I looked at the 2003 edition -- expensive) certainly has a sharp edge with respect to some of the sensitive social issues, and helps us understand where, at some psychological level, social conservatism comes from, regardless of religious explanations.

The first chapter makes the strongest point that homo sapiens had become a biologically homogeneous species before starting to build societies and civilizations, and that it may have eliminated competing species with competition. It also makes the point that we (as humans) are the only species that regularly go to war and destroy each other’s members (sometimes chimpanzees and other primates do that, as do some carnivores, to some extent). But imagine a planet where there is more than one species of the same basic intelligence competing for resources. That sounds like science fiction, all right. Maybe dolphins, orcas and other cetaceans can match us for intellectual ability but do not have the hands to build tools to compete with us.

The authors provide a detailed history of Islam, which in its early days provided progressive ideals that greatly benefited Bedouin culture. The authors leave the impression that the radical rhetoric today does not match what was taught by the Koran. And (particularly in a sidebar called "Civilization and Gender") they make a very interesting point about the role of women. Decentralized, agricultural societies requiring a lot of manual effort often value women more, and sometimes follow matriarchal rather than patriarchal rules for governing property and marriage. As societies urbanize and jobs become more specialized, men tend want to reserve power and opportunity for themselves so that, as conservative author George Gilder often pointed out, they have a place. This was even true of early Muslim societies. The burqa or veil came later, from and other places, as Muslim societies became more urbanized. Early Islam did, however, permit polygamy. Equal rights for women (and sexual minorities) started to become important in the present day, starting mainly with the Civil Rights movement of the 1960s in this country, partly because society had become advanced enough technologically that people could anticipate more personal autonomy.

Tribalism with family and clan loyalty was persistent throughout Arab tribal culture before Islam, and it is generally common in many societies that have to struggle to meeat daily needs. In these cultures, loyalty to blood is a virtue that outranks modern virtues in individual performance and conduct. People simply cannot survive without cooperation within the family, clan, or even tribe. I would personally add that the expectation of familial loyalty becomes an important reward for many people, and they come to see it as an extension of their own sense of sexuality.

The authors provide the usual detailed accounts of the gradual fracturing of the , and make the interesting comment that the well-to-do classes lost interest in bearing and raising children, which seemed to compete with their pursuit of pleasure or “self-interest.” An epitaph on a Roman grave could read “I was not, I was, I am not, I have no desire.” The lack of faith in an afterlife was also a factor in a dangerous excess of objectivism and hyper-individualism. Morality at the Roman heights had set no example, however. At times, families were hyper-patriarchal, to the point that fathers could have their kids killed or sold into slavery for disloyalty; indeed, this was how they perceived familial sexuality.

Picture: downtown Farmville, VA, which closed public schools in the early 1960s in order not to comply with desegregation after Brown v Board of Education.