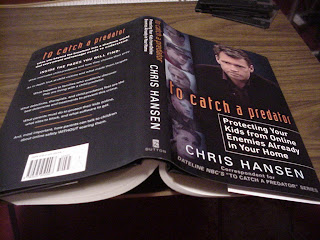 NBC news anchor and journalist Christ Hansen, who often appears on NBC’s Dateline and has been the point man on a notorious series where men come to a sting house (an operation carried out at least eight times now in a number of states) after chatting with someone (from a volunteer team called PJ) whom they think is a minor over the Internet. The men are usually arrested and charged with solicitation of a minor or sending indecent materials to a minor.
The book is To Catch a Predator: Protecting Your Kids from Online Enemies Already in Your Home. New York: Dutton, 2007. ISBN 978-0-525-95009-7, 243 pages, hardbound (Amazon link). The subject matter is indelicate on a advertiser’s blog. But let me get into the philosophical points. It seems ironic now that Arnold Schwarzenegger made a 1987 movie with this word as the title.

First, Hansen wrote the book to get into these matters, which he thinks are better explained in book form than just in television journalism. He talks about the families of the suspects (most of the men are married with their own kids), about the treatment options (and treatment is very difficult), and gives reasonable advice for parents to keep their kids safe online.

Of course, the underlying issue is that now we have the Internet – social networking sites, blogs, and chat rooms, and we allow any member, however untrained in legal matters, to use them, including kids. It should not be surprising that we learn that kids can invite unconceived danger into their homes and even endanger other family members.

The other point is that the Internet seems to invite men who have never been in trouble with the law. They believe that they are simply engaging and extending a harmless fantasy. They may believe that nothing is really going to “happen,” as they get into this with a step-by-step process. (Yes, the chatlogs and the items they bring with them in their cars often do show real intent, but maybe not always.) The anonymity online may be inviting them do to down a dangerous “road less traveled.” And this process does not constitute legal entrapment. “Ordinary men” with positions of custody and trust (teachers, including special education teachers; ministers, members of the Armed Forces) have fallen into this. One of the most disturbing cases was that of Rabbi David Kaye, who was prosecuted nine months later under federal jurisdiction (the Virginia and New York stings did not result in on-site arrests). Another was a Texas assistant prosecutor who did not come to the sting house, but shot himself when police tried to arrest him at his home.

Chris Hansen appeared on “Larry King Live” on March 15, 2007, and again on March 17. Here is another blog entry on his Internet Safety Kit.

Another blogger reference on the conviction of Rabbi David A. Kaye after a delayed a federal prosecution on Coercion and Enticement is here.

A good question would occur if a sting operator actually sent images to someone in a chatroom, where the images (taken of an actor 18 or older) purported to be that of the minor.  But apparently Peej did not do that.

Here's a video of how Rabbi David Kaye gets caught, Youtube link here.
Posted by Bill Boushka at 8:00 AM

I have gone through your site its good and excellent,and i found many interesting things to read ,gathered information
so here i am linking you relevant site to get more details,
onlinebookreviews