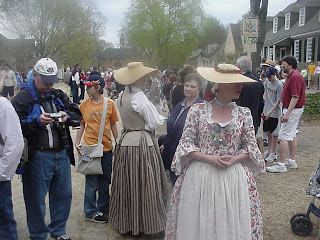 The May 2007 issue of National Geographic contains an intriguing article “America Found & Lost” by Charles C. Mann. The magazine cover includes the subtitle “How settlers destroyed a native empire and changed the landscape from the ground up.” He also claims that what we were taught in grade school history is wrong. England brought biological “infection” to the New World with it – a process that is sometimes now considered in connection with space exploration. These imports may have included the common earthworm, the honeybee and malaria, as well as tobacco. The native American societies thought that they could accommodate the settlers with trade, and gradually became weakened by disease and ecosystem changes. Their population was only 2000 after 60 years.

The tale obviously bares a moral lesson. Drastic changes in the environment can wipe out entire civilizations. What actually happened parallels a lot of science fiction (such as the 1980s TV movie series “V”). But there is the moral question of who “owns” the land or “deserves” it. On a much more obvious scale, the same problem exists today with Israel and the Palestinians in the Middle East. We usually never stop to question how we accomplished political control of the area, before our own struggle for independence.

The article also shows what objects and lifestyles the settlers brought from the Old World. One can really understand the social foundations of any society, its enforcement of tribal, blood and familial loyalty (passed on in marriage), of considering the welfare of one’s “own” before thinking globally, which goes with modern individualism but is a much more recent development as a moral concept.
Posted by Bill Boushka at 6:56 PM