Aaron Jason Silver: Why Gay Men Do What They Do 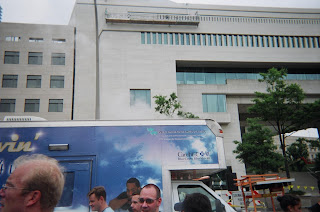 Author: Aaron Jason Silver
Title: Why Gay Men Do What They Do
Subtitle: An Inside Look at Gay Culture
Publication: 2006, Authorhouse, ISBN 1-4259-3875-2 , 242 pages, paper, 23 chapters
with external Foreword (of which authorship is disputed)
Website: here.

The author says that he is giving the male gay community a tough-love tongue-lashing and is a bit unpopular for it. Although in a lot of unnumbered chapters of varying length, the book essentially is in two parts: the first autobiographical, and the second being his criticism of gay male culture.

Aaron grew up, as he says, with ADHD, or Attention Deficit Hyperactivity Disorder and was considered “mentally ill” and borderline retarded until he seemed to mature out of it, developing a skill for foreign languages (it’s ironic that this is what the military is looking for today) and as a grown man developed a dog breeding and boarding business. Widely traveled, he spent most of his life in Michigan, and much of his criticism comes out of some bad experiences with the resort area around Saugutuck. He was not himself the stereotyped “sissy” or “nerd” in high school, but describes other friends (especially Craig) who were. He does talk about his growing awareness of the appearance of other men, and later connects this to a concept of semiotics. He describes his adult relationships, one which ended in a financial disaster which he attributes partly to a lack of legal protections for gay couples, and another where he nurtured another gay man who attempted suicide. He says he was ostracized in his community after this, and the circumstances and reasons are not completely clear. The writing style and density contribute to this. His personal story sounds a little bit like a gay soap opera like “One Life to Live” and might lend itself to being written as a stage play or movie script.

He then goes into a long list of criticisms, sometimes a bit rant-like, about contemporary gay male culture. A lot of this is, of course, familiar. I can recall gay book club discussions at a Minneapolis Barnes and Noble story about the circuit parties (especially in Palm Springs), bare-backing, drugs, preppies, and shaved chests. He goes into lookism and “body fascism” in some detail. Of course, we all know the psychological territory of this, especially on the dance floors (but not everybody who enjoys dirty dancing is “cute” to say the least). Once I made an inappropriate remark at a Pride festival to a friend who had suddenly gained a lot of weight, and got a comment back from him by email – about lookism and superficiality in our community. The author may have read David Skinner’s amusing piece in a June 1999 Weekly Standard, “Notes on the Hairless Man.” [Skinner had written that Hollywood would turn us into a nation of "men without chest hair" and that our culture was developing an unhealthy, anti-family fetish for immaturity.] Lately, the mainstream media has talked a lot about “metrosexuality” in straights, and of laser depilation salons, although, from general summertime observations, the reports on the popularity of these nouveau cosmetic “surgeries” seem to be exaggerated (a Washington Blade ad offered a “leg job” for $2495!) He also discusses social networking sites for gays, with the wide range of profiles, some of them extreme, and warns heterosexual wives that their husbands could be on them! As far as his strong (even vitriolic) criticisms of male gay cattiness, I have not encountered this as much as he did, even though I have lived actively in New York, the Washington DC area, Dallas, and Minneapolis over thirty plus years myself, and traveled almost everywhere else -- but never to Saugutuck. The experience he relates over the reaction of others to his caretaking seems shocking, since the gay community went through the buddy experience bigtime in the 1980s (when I was living in Dallas) when the AIDS epidemic erupted.

He does talk about religion and homosexuality, and mentions late in the book that scholars eliminated the Book of Thomas from the canonical Bible because of its potential political incorrectness considering the power needs of the developing Church. He also gives some history of male homosexuality in ancient cultures, especially Greece and Rome. He correctly points out that the Greeks had a political system of city-states, but actually the culture from one city to the next varied a lot (compare Sparta and Athens) as did intellectual honesty (consider the death of Socrates). The Romans built an empire, and popular misconception blames the fall of Rome on homosexuality – actually it was partly because of over-extension and partly because, possibly, of lead (Pb) in drinking water. But Roman society was often very patriarchal, and high school world history texts point out that often a man “owned” his family and could sell his kids into slavery. Aaron is correct that ancient cultures sometimes had more respect for dual psychological polarity (of the Rosenfels kind) regardless of gender.

Silver misses an opportunity, however, to delve more deeply into the real problems that the “monotheistic” straight world has with homosexuality. (Silver's own background is both Catholic and Jewish-- as was composer Gustav Mahler!) Consider that “conventional” notions of public morality surrounding “abstinence outside of marriage” are supposed to tie sexual intercourse to procreation and child rearing, and, of particular importance, taking care of others besides oneself. (That connection came through in some daily journal passages -- with religious overtones -- in the book "Four Souls" reviewed earlier this month on this blog.) To some people the social approbation for marriage – which often taxes and burdens those who don’t fit into gender-roled traditional marriage with children – is part of what makes the lifelong commitment to “the family bed” exciting and even possible. To some of the rest of us it seems sick – to need to keep other people down so that you can feel good about your own sexuality. (Another way to state this is to say, the institution of traditional marriage demands a monopoly not only on sex but on the broader meaning and experience of sexuality.) But in a sense, gay male ideas about “body fascism” tend to do the same thing, with the tables turned.

Silver made a comment on an earlier blog entry. Go here.

Correlated entry on my main site is here.

Also check my earlier review of Paul Rosenfels “Homosexuality: The Psychology of the Creative Process”, go here (middle of the page).
Posted by Bill Boushka at 12:04 PM

I am Mario Della Casa, and I am The JeannieBottle Man, the owner of JeannieBottles.com I have been confused with Danny Butch who was the actor on Happy Days for many years because of a play I did of the tv show. I WAS NOT ON HAPPY DAYS. and I NEVER forwarded any story to this person Aaron Jason Silver

I'm Aaron Silver. I am the author that Mario did the forward for my book. There has been some cofusion about whether Mario misrepresented his actual role in Happy Days. I made it very clear in the forward that Mario was not the T.V. character but the one in the musical of Happy Days. My publisher,Mario and I had a conference call a few days ago about this issue. The way I understand it is that Mario was contacted by the character from the T.V. show and wasn't very happy. After my publisher read the forward for the book to Mario he did finally admit to writing the forward. I'm very sorry that people didn't read the forward exactly the way it was written. I do hope that Mario won't have any more problems about this issue. Mario and I were telephone buddies. We spoke on the phone frequently. We talked about gay culture a lot and we had the same philosophies about it. That is why I asked him to do the forward. I want to thank him again for writing the forward and I hope it doesn't cause him any more grief. thanks, Aaron Silver