Four Souls: A Worldwide Odyssey in Search of the Epic Life 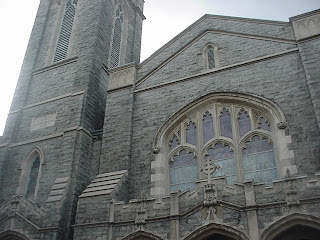 The four authors are young men who go on a round-the-world trip to some of the earth’s most troubled spots. They raised money from friends and performed service (ranging from housing construction to working with teens) at their multiple locations. The spirit is much like that of church groups helping after Hurricane Katrina or Jimmy Carter’s call for “service” at a Habitat for Humanity event at the Washington Cathedral in the 90s.

The books contains many daily journals by each of the four men, along with many black-and-white thumbnail-like photos.

It’s easy to imagine this becoming a spectacular, widescreen docudrama motion picture. Would a company like Fox Faith be game? Imagine doing all filming on location, recreating the journey in a post 9/11 world (the book was written just before the tragedy), because the book makes so many pertinent observations about the history of each region visited. For example, the authors talk about the poverty of the modern day Maya, descendants of a great civilization that failed. (Remember Mel Gibson and Apocalypto.) There are valid historical questions about the moral responsibility for the state of modern day Latino civilization (which, as they point out, has its own hidden racism).

They make many observations about Islam, and the fact that in Islamic countries people are registered by the religion into which they are born, and still discriminated against if they convert to Islam. One of the men is complemented about his apparently thick "Islamic" beard.

The book, of course, is infused with a lot of reflection about Christianity, more than is usually “appropriate” in most “literary” writing. The authors seem to take the point of view that faith is something either experiences or one does not, and it is beyond the usual intellectual ruminations that lead to doubt, often well-founded with scientific literacy. Christianity lays out rules for how people should live (and this includes the rules about abstinence and marriage) so that people may be “free” within the boundaries created by observing these rules. But the “rules” are related to an unseen purpose about God’s plans for people collectively, rather than individually – that (the “natural law” problem) seems to be the view of the authors. Of course, many other faiths (including Islam) make a similar claim (and one can go one about the philosophical meaning of Salvation by Grace alone).

The modern individualist, however, sees morality in terms of personal responsibility. Science takes the position that people are born with different capacities and what is “natural” is much more complicated than the view usually offered by religion. People are born with different amounts of ability, and such is affected by environmental circumstances, so the individual sharing of burdens and hardships and interpersonal accountability to others (as in marriage or other social arrangements) becomes a moral question even for individualism. (They give examples of the behavior that comes from the indignation associated with collective injustice and extreme poverty, such as constant car-jackings in South Africa.) Such considerations lead to the idea that service (as Jimmy Carter would describe it) is a good thing. The authors give as a deeper example the vow of poverty and service perspective (without concern for efficiency) of people like Mother Theresa. From a deeper perspective of commitment to God, the intellectual and utilitarian introspection of "good works" would seem, in the world of these authors, to disrupt their very experience of their own faith.

Zach Hunter mentions this book briefly in his own book (May 22 entry on this blog).

More quotes at my other review site, here.

Here is a missionary blog from Guatemala Appropriate Technology by Dan Divelbiss (blog and slide show, many engineering photos). Interesting is his comment about respiratory disease in poor rural population associated with unsafe indoor cooking practices, something no one in richer living circumstances in the West would think of. The name of the host site is "God Loves: Mobilizing the Body of Christ into the World: Mission Impact."

On June 27, 2007 "CNN Heroes" added a video about Ryan Hreljac, who founded Ryan's Well Foundation to help bring drinking water to Uganda. The link is this.
Matt Damon was reported in the broadcast (July 7) to have helped start H2OAfrica, link here.

A similar hero is Aaron Jackson, who founded a project to deworm children and clean the water in Haiti. CNN's reference is here (broadcast Sept. 22, 2007).

The DC Environmental Film Festival has an event at National Geographic March 12, and here is the write-up of U.S. Wash-in-Schools Initiative, here (pdf) and here (Water Advocates).