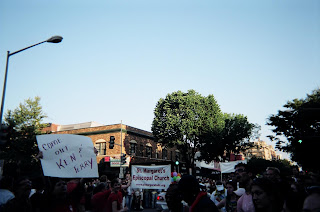 This relatively brief book was mentioned in a recent article in The Economist, discussed here: The author is a senior fellow for the Manhattan Institute and a contributing editor to the City Journal.

It’s pretty clear from the title what her basic premise is: that African American economic performance, and the plight of the poor in general, is closely related to the breakdown of the nuclear family – of two legally married opposite sex parents – as a cultural norm. Of course, many people will disagree with over emphasis on this thesis: after all, many will say, families provided an excuse for all kinds of class-based exploitation, starting with slavery and segregation, and abusive practices of some of our capitalism today.

But she does make a strong case for her ideas. She presents plenty of studies showing that upper middle class families tend to be more stable, that kids growing up in two-parent families do better in school, and tend to have a “script” that encourages them to continue the social pattern of their parents: forming two-parent families themselves.

Her core concept is “republican marriage” – which she believes sets American society apart from Old World cultures – even Europe, with its pattern of royalty (however it started to fracture with the French Revolution as well as American). People accept marriage and family as the basic institution to raise children – and particularly value the freedom to choose their own sexual and lifetime soulmates according to their own values, but at the same time raise their kids to think for themselves, do their own thing, become self-reliant, and at the same time tolerant or accepting of others who are different. If this expectation contains a few contradictions, so be it.

The problem comes from the sexual revolution, which, of course, seemed predicated on the idea that people needed more personal expressive freedom. In the course of the revolution, people came to see relationships – whether legal marriages or not – as mainly set up for their own personal happiness. Raising children became a separate choice. When this cultural divide sifted down to lower economic classes (especially African Americans) it led to a culture of single motherhood and a view of men as peripheral in their role as parents. Of course this is harmful. Other conservatives have pointed out that the “welfare state” has contributed a lot to the breakdown of the black family.

She mentions gay marriage at various places, and complains that Jonathan Rauch and Andrew Sullivan dismiss the necessary connection between marriage and procreation. (I really don’t think that they do.) . Of course, we all have read countless conservative pieces that claim that gay marriage will redefine marriage as a procreative social institution out of existence.

Of course, however, the missing piece of all of this is indeed “equal rights.” There is a basic problem – call it mixing apples and oranges if you will – one of immiscible entities, with different (personal) expressive and psychological goals – wondering how they can ever be exactly “equal” when they use each other’s resources sometimes and then can trample on one another’s sensibilities. As a matter of logic, a utopian ideal of absolute equality and perfect environments to raise children seems unachievable. During the sexual revolution, gays (and feminist women – who have an agenda that the author sees as expired) made progress, so this contradiction seemed tolerable. But the practical reality is, there are all kinds of issues about how non-procreative people should share cross-generational responsibilities and how they can get in the way. All of this needs a complete airing, and it’s difficult to get anyone to do it. I’ve talked about it a great deal on other blog entries.

She does approach the problem a few times, however, at least as a matter of anthropology. Early on, she mentions that some cultures hold siblings legally accountable for some aspects of each other’s families (so that family responsibility is not a choice). She admits that there is a real tension between the work ethic of capitalism (including the creative work ethic of artists) and the demands of family and raising children, which puts working women in a real bind – and which European cultures today, with their pro-family policies, may well be undercutting. She probably would say, if you’re single (especially if you’re gay) and productive and creative without having kids, have at it – but the problem is, others may demand sacrifices of you without consciousness of it. Toward the ends, she writes that gay marriage debate “encapsulates the tension between the sexual revolution and the new conventionality.”

Ultimately, however, we come back to a tension between commitment to equal human rights, and recognizing the apparent reality that some critical functions of society (child rearing, particularly) need a collectively supported shell that seems immune to totally rational thinking. Or is that just an appearance?
Posted by Bill Boushka at 1:21 PM