Kay Hymowitz: Ready of Not: Why Treating Children as Small Adults Endangers Their Future--and Ours 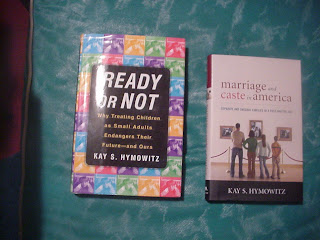 Author: Kay S. Hymowitz.
Title: Ready or Not: Why Treating Children as Small Adults Endangers Their Futures -- and Ours.
Publication: New York: The Free Press, 1999 ISBN 0-684-83264-6, 292 pages incl. endnotes and index; with an introduction, seven chapters, and conclusion.

I reviewed Dr. Hymowitz’s more recent book on Marriage and Caste two blog entries down, but this older book (with a cherry rainbow checkered dust jacket) warrants a bit of personal digression. But her underlying thesis, which wavers a bit during the book, requires restating. That is, as adults, we have developed a certain emotional disconnection from family life, and have difficulty accepting that "kids are kids" when we raise them; the disconnect has grown to the point that many people delay or avoid marriage altogether and are not prepared to share family responsibility (which now, in a world of fewer children, includes eldercare, a specific point that she really doesn't deal with -- but perhaps will in another book, given the demographics of today).

Two springs ago, I was substitute teaching in some middle schools, and ran into difficulties in which administrators thought I was unable to maintain discipline. In one case, I had a three day assignment with an eighth grade science class. This was in a high income school district, and I took a laid-back approach. The teacher’s lesson plans were clear, as the students were to fill out video and reading worksheets. About 85% of the students did the work without any prompting by me whatsoever (a few of them were mature enough to be allowed to take courses on their own at the senior high school a few blocks away). But a few kids presented real problems. The next day a guidance counselor appeared in the class, as well as a special education teacher, to help “protect” a couple of the female students (an offensive idea) from male taunts. The teacher had “bribed” the kids with a promise of a pizza party for the section with the best rating from the substitute, but out of maybe eighty kids, I had to write up about six of them. (Again, a number of non-problem kids were just super as to the work they handed in.)

On another middle school assignment in music, I had one eighth grade orchestra class good enough to perform an Offenbach overture for me, to rousing conclusion, another independent jazz ensemble, and an advanced sixth grade band that could lead itself. But two other six grade classes had serious problems. One student would beg me to intervene in silly teasing squabbles, and I had no idea what to do.

The Arlington school system substitute manual does encourage subs to be pro-active, to make eye contact, to greet students at the door, etc. Although I did very little grade school, I saw in elementary school classes an intimate environment, with kids seated on rugs. Sometimes kids would hug special teachers that came into the room. One time a kid in extended day asked that his shoes be tied.

Many educators write papers about how it is wrong for schools and teachers to have one standard of conduct and performance in looking at student. Yes, they say, every teacher loves to see the student who does the right thing without prompting (and many do, even in middle school; if you get an AP class, they know exactly what to do). But, they warn, don’t expect an even playing field in student performance or maturity. They speak of “progressive responsibility” and “differentiated instruction.”

All of this experience certainly fits with much of Hymowitz’s earlier book. (I have a more technical description here: She notes the loss of community in raising kids, the fear of legal repercussions, and at one point notes that the false accusations against parents and teachers may actually be encouraged by our culture of viewing kids as “little adults.” She also suggests that kids cannot grow up and learn proper judgment about things without the continuous involvement of authority figures to both install cultural and moral norms, and without the staging of learning in such a way that kids have enough skill before they are allowed to make grown-up decisions. School systems will always warn substitutes, to be sure, that some kids do need a lot of attention. On the other hand, as I have noted, more mature kids love it when a teacher facilitates rather than over-manages (I have heard the complaint of regular teachers “She treats us like babies:”). I can remember one honors chemistry class where we spent several periods Googling for information for homework problems on orbitals and electronegativity with absolutely no misuse of Internet access. (I remember another one deriving gas law equations from hyperbolas with parametric equations.)

Hymowitz, toward the end of the book, notes that the false autonomy of young people is encouraging them to delay and even avoid marriage and openness to having children. The sovereignty is often well intended, especially by women, intending on finishing education (like medical or law school) and careers. Adults (as I believe Bill Maher once pointed out on Charlie Rose) grow up unable to communicate meaningfully except with other adults with adult cognitive skills. But payback, as they say, is a b___. We were all toddlers once, and had the attention of parents, although perhaps not “attachment parenting.” Many of us, even if we have no children of our own, may face severe eldercare burdens down the road and suddenly discover our own communication gaps. As a matter of morality, even in the calculus of individualism and karma, we owe something back for what was done for us.

Conservatives like Hymowitz have a hard time talking about what it takes to socialize young adults into family and meeting the needs of others. Liberals talk about social programs, and conservatives stumble. The trite truism is that “women tame men” and get men interested in becoming fathers and connecting with children as loving parents, and as role models. One problem, though, is that you have to compete well in today’s kind of world to feel that there is any point in becoming a parent, until you have “done your own thing” first. Adolescence must last forever, it seems. My father once said, “one day, blue eyes will confuse you,” but they did not. There is no free ride in being ready to bring other life into the world and change one’s priorities and admit that it may take progeny to get your own thing done. Otherwise you can wind up unable to do your “payback” and connect with kids (or the elderly) when you are needed, and you may realized you skipped a whole duty of life.
Posted by Bill Boushka at 7:17 PM