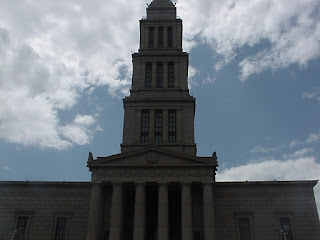 The author, president of Congressional Quarterly, has discussed this book on CNN recently. The basic thesis is that civilizations, with different paradigms for basic values, rise and fall, and that it is dangerous and mistaken for the West, especially the United States with its neoconservative movement and the Bush administration, to pursue a policy of imposing its values on other parts of the world, most of all the Islamic world.

The early chapters of the book discuss the “Progress Ideal,” relating from the End of History thesis of Francis Fukuyama, which somewhat relates to the “World is flat” idea of Thomas Friedman. He gives many examples of foreign policy, back to World War I, where misapplication of this idea has led to tragedy, including the idea that the Balkan settlement even helped radical Islam get a launching pad.

He comes around to discussing Islam, both the virtuous idealism of Egyptian Sayyid Qutb, but moreover the way Islam developed on top of “Magian” tribal culture in the Middle East. He depicts this culture as based on tribal and kinship values called asabiyya, with made and female honor concepts called sharaf and ird. Islam structured this into a theology that had logical explanations as to how people in this kind of culture should behave, and how these rules came from God or Allah. But really all religions must do this kind of thing, and that includes Christianity. But people in this culture became very dependent on the idea that religious values dictate everything else so that separation of church and state as a westerner understands it seems contradictory.

Western values have, in this view, evolved into a kind of hyper-individualism, where the individual maps out his own course in life, regardless of religious or familial ties. The controlling factor is a secular system of law, and equal protection of the law to all people. It’s easy to see how this cultural develop leaves a lot of people “exposed.” Tribal cultures are very good at protecting individual members from their own “weaknesses,” at the risk of continual war with other competing tribes for resources. Likewise, authoritarian secular cultures (even communism) can claim some success at this. But the “emancipation” of the individual from the controlling emphasis of the family is a relatively recent development even in western culture, and is particularly problematic with some parts of American culture, especially evangelical Christianity, which sees hyper-individualism as an assault on the protective and character-building values of the family, and an invitation for marginalized individuals (including gays, often enough) to desert their families. Therefore, I don’t think that, at a psychological level, that the schism between civilizations (which he builds up as a development following the collapse of communism) is as simple as he makes it look. He is right, however, that radical Islam has used the asymmetry associated with individual freedom (like publishing on the Internet) to promote its own tribal and “collectivist” ideology, and that is a bit of a paradox.
Posted by Bill Boushka at 11:10 AM