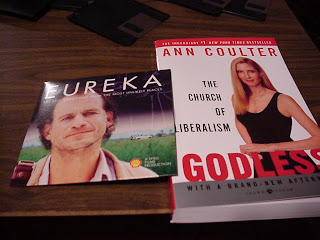 The book was first published in hardcover in January and then reprinted in paper in June with the Afterword, which tries to debunk the idea that Democrats tried to do anything constructive at all about Al Qaeda during the Clinton terms.

Coulter’s reputation as a columnist with a conservative bite is well known. Perhaps she is like a female Rush Limbaugh. Here, her basic thesis that liberalism is a pseudo-religion (I think one of the televangelists in the 80s had a booklet that called liberalism “a rope of sand”) based on suppositions about equality that seem to come from hyper rationalism but that lead inevitably to contradictions. So, one might as well accept the idea of a Supreme Being who makes moral laws that allow for inherited inequality but help us love together in both freedom and kindness – but it means giving up some intellectual pride.

Coulter’s book goes into quite a bit of detail on a number of issues: criminal sentencing including capital punishment (and racial disparities); abortion; the CIA leak scandal; the track record of liberals on terror; the spoiling of teachers (she gives a comparison of teacher “misconduct” with that of Catholic priests that seems horrible in the numbers, but statistics can be deceiving) along with the sundering of public education (she sees urban public schools as largely warehousing delinquents). She gives a somewhat truncated defense of the arguments by Richard J. Herrnstein and the now libertarian Charles Murray in his book “The Bell Curve: Intelligence and Class Structure in American Life” (Free Press, 1995) regarding IQ and race. She debunks the political comforting notion, often circulated in the mid to late 1980s, that AIDS and HIV could eventually become a credible threat to prudent heterosexuals. The book maintains that C. Everett Koop testified in the late 1980s under oath that only 4% of AIDS cases worldwide were accounted for by heterosexual transmission (how does one explain AIDS in Africa, then?) and 2.3% in the United States.

But the most provocative part of the book deals with evolution. She maintains that Darwin cannot, and never tried, to explain the sudden appearance of completely new species or even new biological structures (mitochondria). She does make a good case that intelligent design can comport well with science, and then toward the end she suggests that there is a connection between Darwinism and fascism or Nazism that approaches becoming ineluctable. The idea that some people are naturally “better” can be used to shield people from disquieting community or familial attachments, but it can also redefine a culture’s moral sense to the extent that people become expendable. Of course, in Nazi Germany this happened to whole classes of people, not to people just as individuals. Christian morality buffers society against this, but then one wonders what happened to the Christian (Lutheran and Catholic) churches in Germany in the 1930s. The pastor of the First Baptist Church of Washington DC, Edward H. Pruden, during the 1950s took that question up in his 1951 Judson Press book, “Interpreters Needed.”
Posted by Bill Boushka at 7:11 PM