Fun with Dick and Jane 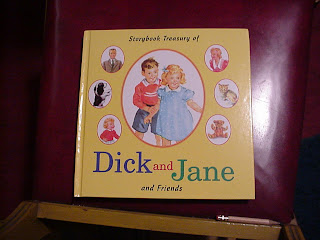 I was perusing amazon.com the other day when I looked at the entry for “The Storybook Treasury of Dick and Jane.” I did look at it, but somehow the Amazon system generated a rush UPS book order, without sending me through the checkout process. I’ll have to check with them about this, because I did order another book and the site worked properly. But this anthology is an interesting item to discuss anyway.

In first grade in 1949, I recall three paperback “Dick and Jane” readers, known now to have be called “Elson-Gray” readers published by Addison-Wesley and using the trademarked imprint Scott, Foresman and Company I believe that the first one was “We Look and See”, had a red cover, and ran 48 pages. The second one was “We Work and Play” and had, as I recall, an orange cover and ran 64 pages. The last was “We Come and Go” and had a blue or green cover and ran 72 pages. I remember being fascinated with the appearance to the page numbers and the font used. How well do most of us remember first grade? School ended around 12:30 PM, and at mid morning we would have a milk break. We could choose white or chocolate milk, and white milk was “better for you,” and idea that certainly, in retrospect, has social overtones.

I recall some of the other readers. In third grade I think we had "Streets and Roads" and "More Streets and Roads". As time went by, fewer pages had pictures on them. We even read a simplified version of Grimm’s Rumpelstiltskin by the end of that grade.

Grosset & Dunlap offers an anthology of the three volumes, in an attractive yellow hardcover, oversized, published in 2006, ISBN 0-448-43340-0, for about 9 bucks on Amazon. The original page counts are maintained, and the stories and illustrations seem to be the same. The original paperback cover is reproduced as a page before each section. But the last two sections are resequences.

Of course, these were basic readers, drilling one word at a time, often in repetition. The first words to be learned are “look” and “oh”. Each “story” is told in pictures, to reinforce the words. When Spot and Puff are introduced, the differences between canine and feline behavior show up in the pictures. The “Puff and Dick” story starts with a picture of Spot looking at tree with Puff not in sight. Only on the next page does the reader see the concept of a cat stranded in a tree.

The readers, of course, reinforce the idea of the cohesive, two-parent nuclear (European American) family with children, and pets, and with every one having his natural “role.” This would not sit well with everyone today. In a sense, the readers anticipate the style of the Alyson books “Heather Has Two Mommies” by Leslea Newman and Diana Souza, and “Daddy’s Roommate” by Michael Willhoite, that would stir up controversy in the 1990s.

After graduating my senior year in high school and starting college (that’s another story) I took “notehand” (a baby shorthand) in summer school, the theory being that would help with college. We made a trip to GW for an afternoon summer class in “children’s literature” to practice our “skills.” I get emails on “learn to write for children” to make money, as if it were a well-organized market. On the other hand, some literary agents do not work with children’s material.

There have been two versions of "Fun with Dick and Jane" in movies, in 1977 and 2005, where financially stressed adults go on crime sprees (hardly the intent of the readers). The second film makes light of the Enron and Worldcomm scandals, and uses cute language from the readers ("Run, Dickm run!") for rather obvious humor. Short review is on this file.

Remember that Paul Rosenfels, at the Ninth Street Center in the 1970s, had his cerebral definition of "fun". (Review in the April 2006 archive on this blog.)

Note on punctuation: typically in these blogs, I often both quote and italicize a book or movie title to make it stand out to the browsing eye. I do realize that in formal English one does one or the other, not both (quotes for articles, italics or underline for books and movies).
Posted by Bill Boushka at 7:54 AM