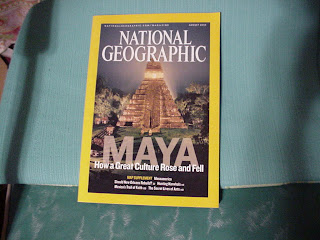 The August 2007 issue of National Geographic is a socially relevant issue that would make Al Gore and Participant Productions proud.

The cover story is “Maya: How a Great Culture Rose and Fell: The Maya Glory and Ruin: Saga of a civilization in three parts: The rise, the monumental splendor, and the collapse,” by Guy Gugliotta, with photography by Kennett Garrett and Vania Zouravliov, with maps. The presentation is divided into three more essays, one for each phase. The Mayan civilization ruled its world for about a millennium. It did not fall suddenly at the arrival of the Spaniards, an idea suggested by Mel Gibson’s 2006 Touchstone film “Apocalypto”. Instead, starting in the eighth century there was a gradual collapse related to over use of natural resources, climate change (“an inconvenient truth”) wars and rivalries that at first led to stalemates but that in time caused a loss of equilibrium and stability.

High schools now require world history and teach the histories of non-European peoples. Mayan political history is long, non-linear, and complicated, and hard to grasp as a continuum. It did not evolve beyond city-states into a modern state system that probably supported technological progress and eventually led to political revolutions (American and French) and modern ideas of liberty.

Whatever the splendor of the cities and the mathematical and astronomical accomplishments of the priesthoods, it does not see that individual liberty was an issue that could grab history and drive it the way ours does.

As archeologists and anthropologists warn us repeatedly, the history of the Maya provides us with a reminder that we can fail. Today, descendents of the Maya live in poverty in Central America and southern Mexico. A book review on June 2 on this blog (see archive link) also refers to the Maya, and a water project now going on in Guatemala.

This issue of Geographic has two other important features. One is an analysis of “resettlement” of New Orleans, with color-coded maps showing settlement density relative to elevation. The article is “A Perilous Future: The sinking city faces rising seas and stronger hurricanes, protected only by dwindling wetlands and flawed levees. Yet people are trickling back to the place they call home, rebuilding in harm’s way,” by Joel K. Bourne, Jr. and photography by Tyrone Turner.

Also, on p 33 Geographic offers a Mercator map with a color graph, “Who Gives Parents a Break?” Underneath is a legend, “Guaranteed Leave for Mothers, 2006.” Among advanced countries, only the United States and Australia bat .000. Still, this is not a call for Michael Moore-like socialism. It does raise questions about the paradoxes of individualism.


This posting will be a Grindhouse double feature. Today Kendra Marr has an article on Page D1, Business, of the Wednesday Jul 18 The Washington Post, “Potter Fans’ New Nemesis: The Web.” Apparently some pages from the last Harry Potter novel “Harry Potter and the Deathly Hallows” have leaked out through Photobucket onto some other websites or Bit Torrent sites. The book is due at 12:01 Saturday July 21. There was even a news story about a printing company and heavy railroad branch line traffic feeding it at Crawfordsville, IN. The publisher Scholastic has subpoenaed some companies trying to locate individuals who leaked copyrighted material.

Kids become experts in the details of all the intricacies of J. K. Rowling 's Potter novels. Many high school English teachers give detailed "reading quizzes" each class as the students read curriculum standard novels (Lord of the Flies, The Great Gatsby, To Kill a Mockingbird (more controversial) etc; we had to deal with Silas Marner) and find the attention to detail required in reading assigned material more challenging. (Although they do get to read Jurrasic Park).

Of course, we’re all wondering what happens to Harry. My guess is, “He Lives” but I could be wrong.
Posted by Bill Boushka at 6:51 AM