Oldies but Goodies, and memories of grade school 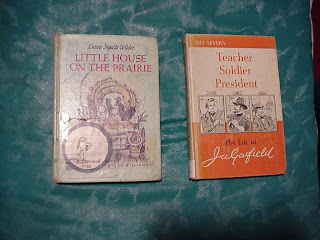 The last day of school at an alternative high school, when I “sub-taught” there were few students (graduation was over) but a few teachers were giving away old books. Particularly in the ESOL (English as a Second Language) area there were a few old gems. I picked up a couple of these, and they remind me of the hardcover readers we used to have in grade school.

These books pre-date the days of ISBN ‘s (International Standard Book Number) although they have Library of Congress catalog numbers.

One of the books is Laura Ingalls Wilder’s classic. Little House on the Prairie , all the way back to 1935 (from Harper & Row) illustrations by Garth Williams, 1953, 335 pages, many of them illustrated, with large print. Many people remember the television series, and actor Michael Landon who died of cancer in 1991. The book tells the story of a pioneer family from the viewpoint of one child who never seems to use the word “I”. The family loyalty to one’s own is quite striking, as native Americans are perceived as potential enemies to the settlers, and sometimes the author describes them in terms that wouldn’t be accepted today. Toward the end the family has to deal with the legal realities of all this.

The other that I picked up that day was Bill Severn,. Teacher, Soldier, President: The Life of James A. Garfield , (Ives Washburn) dating to 1964, 177 pages, hardcover. Mr. Garfield had the second shortest term on record as president (four months – it looks like William Henry Harrison had the shortest – go to the White House site ), and his life corresponds to the notion of the Renaissance man that some of our television icons have today. At age 17, James was already teaching school, and sometimes living in the homes of parents of the students, as was the custom of the time.

The first "Dick and Jane" paperback readers (from Elson-Gray) from first grade stick in my mind to this day. The books were red, orange and green, as I remember, and had 48, 64 and 72 pages. Somehow the page numbers and pictures were more interesting than the text. It looks like Amazon has a collector's edition of this in hardcover, available only from resellers, and expensive.
Posted by Bill Boushka at 4:21 PM