National Geographic on Saturn and Titan 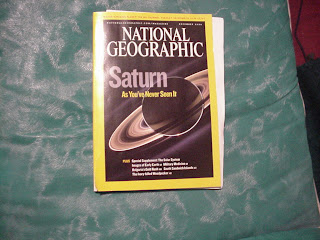 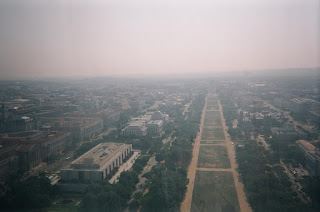 It appears that there are at least four places in the Solar System besides earth where carbon-based life is possible or may have existed in the past. Mars, the Jupiter moon Europa (as in the movie 2010), and now Enceladus.

The 2006 issue of National Geographic is called “Saturn As You’ve Never Seen It”, and then “Beautiful Stranger: Saturn’s Mysteries Come to Light.” There are two live color pictures from the Huygens probe of Titan (Jan. 2005), one having two low mountains with rivulets. The other (better known) is a river bed covered with ice pebbles. The smoggy sky is brighter than expected at such a distance from the Sun. The article maintains that methane (CH-4) rain may fall once a millennium near the equator, but much more often near the poles where the countryside looks like northeastern Minnesota (without vegetation), with methane or ethane lakes, some twenty miles across. Along the equator there are miles of parallel sand dunes. Carl Sagan, in a book written in the late 1980s, had speculated that thiolins fall onto the surface of Titan. Scientific American had a major article on Titan in 1986, and discussed its "reducing atmosphere."

Enceladus apparently has interior water, the erupts as ice geysers. It’s unclear how it got there.

Saturn itself is, of course, a gas giant (like Jupiter) with the thickening atmosphere, liquid hydrogen, probably metallic hydrogen, and rocky core. The article has huge pictures of the rings.

Venus could have had life at one point, before a runaway greenhouse gas effect and “global warming”, maybe rather suddenly less than a billion years ago, produced the current furnace.

Another possibility, besides Europa (with its underground ocean) could be Ganymede, which also might have an internal ocean.

I have a sci-fi “sociological” screenplay called “69 Minutes to Titan” at this link:
Because of certain sensitivities, some material has been removed form the version displayed on line; my private version is more complete (about 124 min, R). One of my hypotheses is that angels use Titan as a staging area before traveling to Earth to interact with humans, who are finally abducted and invited to come to Titan.

I'd like to see an Imax movie show the surface of Titan.

Picture: A Titan-like smog hides the US Capitol.
Posted by Bill Boushka at 8:18 PM