CBS News "What We Saw"; Other album books remembering 9/11 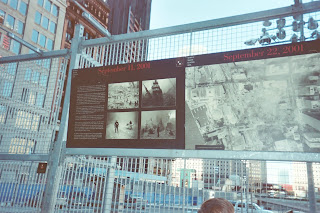 The book is accompanied by a DVD called “The Witnesses” in eleven Chapters. The most interesting portion may be the first fro, Bryant Gumbel, which came on the air with a “Special Report” at 8:52 AM, six minutes after the first plane struck the World Trade Center. In the beginning people did not realize that this has to have been a crash with a large airliner. He talks to three street witnesses, two men and one woman. It was hard to grasp the gravity of what was unfolding (“Stewart” says, “it’s not too crazy right now”), until a second witness says he tried to put a fire out on a burning man on the street, and then the third witness, a woman, is talking while the second plane hits at 9:03 and the woman comments immediately that this must be on purpose. The woman saw the plane hit before Bryant Gumbel did; the fireball on the South Tower appears without the plane on this particular video. Then the DVD switches to Gumbel's reporting on the crash into the Pentagon at 9:43 AM.

Some of the remaining chapters zero in quickly on Osama bin Laden, referring back to the 1993 attack, and have the tone that many people had understood that a battle with radical Islam had been going on for a long time. The book has many other contributors, including Byron Pitts, Pete Hamill, Bill Geist.

Life Magazine has a book “One Nation: America Remembers September 11, 2001,” with an introduction by Rudolph Guliani, published by Little Brown.

The Robin Hood Relief Fund (and de.MO) has a glitzy paperback “NewYorkSeptemberElevenTwoThousandOne.” The first page has a copy of the front page of the New York Times that morning, a primary day, and oddly there is even an article on school dress codes.
Posted by Bill Boushka at 8:36 AM