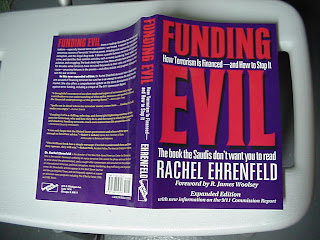 Dr. Rachel Ehrenfeld, director of the American Center for Democracy in New York City, has become a test case for a new legal controversy with her book that “the Saudis don’t want you to read.”

The book came out in 2005 in an expanded edition including a new Preface, explaining the legal situation, as well as an Epilogue. It had been originally published in 2003.

In early January 2004, she writes, she received an email from a law firm in London threatening to sue her for libel in British courts for allegations she printed in her 2003 book about the activities of Saudi billionaire Khalid bin Mahfouz. The Wikipedia entry, as factual as possible perhaps, for this person is here.

It’s pretty unusual for lawyers to contact anyone by email first. Usually they send a cease-and-desist letter by certified mail, and if necessary to litigate, use a sheriff or, more frequently, private process server to actually serve papers (they can be sent by registered mail in most states). But in this case an American author was to be sued by a foreign businessman in Britain about a book never published in Britain but merely ordered by some British subjects, probably in a deliberate campaign to justify litigation. There are more details on my International Issues blog here about this new problem of “libel tourism”:

I won’t repeat the specific allegations about the businessman here, but just say that the facts in her book and extensive detailed references and notes seem to speak for themselves to the customer who orders the book (as I did from Amazon).

The book is titled “Funding Evil: How Terrorism Is Financed – And How to Stop It,” published by Bonus Books in Chicago (296 pages, paper). There is a foreword by B. James Woolsey.

One of her basic points is about the culture of Islamic society. She talks about the “House of Islam” and the “House of War” – as everything outside of the mosque. It’s odd to describe a structure like this, because, unlike the Catholic church, Islam has no formal priesthood, is formally decentralized, and ought not to be as susceptible to corruption. But she describes corruption as a normal way to do business, as equivalent to “economic growth” in other countries. Islam, with its anti-usury laws and informal financial processes (hawalas) that transfer money indirectly without moving it, as well as a patriarchal culture that demands family loyalty (and financial support) from everyone even when they emigrate to the West, can pretend to be a society without fiat money, and only “Allah economics” despite the fact (as the extravagance in places like Riyadh and Dubai attest – with the manmade “Palms” and “archipelago” that could go under global warming) that it seems to take as much advantage of world extreme capitalism as any culture. The confusion culture makes it easy to "launder" money through all kinds of schemes that she lists in many places with dot points.

She spends a lot of space on narco terror (especially Hizballah), as if to suggest that drug users are, with their demand, contributing to terrorism, although one can also say that criminalizing drug use invites the problem.

Check a related review of a book by a man who spent a year working for an Islamic "charity" on this blog on Aug. 25.
Posted by Bill Boushka at 7:40 PM