The World and I: another look at "Currents in Modern Though" and a Kaplan essay on finding fundamental rights in the Constitution 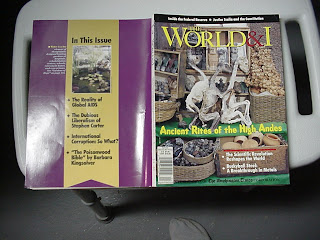 The World and I (link) has been a meaty, well illustrated, polished and somewhat expensive magazine about international and national cultural issues, with a conservative editorial bent, for many years, published by the conservative newspaper The Washington Times.

Some issues have had a section toward the end called “Currents in Modern Thought,” and the April 1999 issue, still lying around the basement, has a couple of contributions worthy of note today.

Two of them are less important than the other, but I’ll mention all three. The last one is an article about McClures’s (and S. S. McClure) by Linda Simon. The magazine was important as a long-standing example of expository journalism, ruthlessly fact checked, but willing to give writers time and resources, and effective in exposing public scandals in issues in a time long before amateurs could to the same with weblogs.

The first article, by Gerald V. Bradley, is “The Dubious Liberalism of Stephen Carter,” and starts out with the sentence, “I got into law school because I was black.” But, not being a diatribe on affirmative action (and "Reflections of an Affirmative Action Baby" (Basic, 1991), the essay is instead an overview of Carter’s books and writings, including “The Culture of Disbelief” (1993) in which, the reviewer believes, the author is trying to build an argument for assimilationism that strands conservativism and liberalism (sounds Clintonian), allows all gripes and somehow doesn’t give in to irrationality. It accepts an incremental approach to abortion and a growing rationalism, which must confront faith-based principles, in gay rights (with some discussion of Bowers v. Hardwick – this issue is pre-Lawrence and pre-Massachusetts).

But the most important, and longest piece, in this issue is W&I editor Morton A. Kaplan, “Tribe and Scalia on the Constitution: A Third View.” Kaplan has a habit of reflecting on his writing as he writes, and that extends his lengths, and he tends to argue with himself. But, in his mind, that will seem necessary. He examines a few important cases, such as the flag-burning case (Brennan’s decision), contraception (Griswold) and most of all Roe v. Wade (abortion). The apparent polar opposites are Justice Antonin Scalia and Harvard law professor Lawrence Tribe, although the recent Bush appointments of Alito and Roberts can complicate such discussion today. Kaplan mentions the book " A Matter of Interpretation: Federal Courts and the Law" (The University Center for Human Values Series, Princeton University, 1998), by Scalia and Amy Gutmann.

The core problem is the “invention” by judges of “fundamental rights,” and idea that I discussed at great length in my first two books in the late 1990s (now, those seem like the good old days). Kaplan talks about the problem of “original intent” and the issue that language itself changes with time, and that words (codified into the Constitution or statutes) take on new meanings with time. (For example, the word "person" in the law can include a corporation.) Kaplan argues, however, that any re-interpretation of original rights as written into the Constitution and Bill of Rights (that is, any rights “invented” in the context of the Ninth and Tenth “penumbra” amendments) need to be done so only with a clear direction from the prevailing culture. Since this article appeared in 1999, it’s a good question how Kaplan would react to the Lawrence v. Texas decision in 2003. Privacy has been an important cultural concept in the objection to laws that regulate consensual sex (as with Griswold in 1965), and today the cultural change brought on by the Internet has changed the moral focus away from privacy more to expression, and the idea that one must contribute or share something of emotional substance for what one takes. Kaplan gets into the problem that the law does express moral notions, and almost by definition or tautology, moral determinations will come at the expense of someone; the question is what principles the culture has in determining who makes the ultimate “sacrifice” of some piece of rights or psychological property. He spends a lot of time on the intellectual sequels from various assumptions about the humanity of the unborn child.

Kaplan touches on the complexity of the constitutional amending process, and considers the high barriers to doing so appropriate. A good book that dissects all of this is John R. Vile, "Contemporary Questions Surrounding the Constitutional Amending Process", from Praeger (London), 1993.

Looking further, of course, we see that “moral notions” are important to people as a baseline. In a difficult world, people sometimes want to know that what they did or gave up doing was “right” and necessary. Yet, it’s interesting, as one comes back to the role of religion and faith, that in Christianity, at least, there is more emphasis on the heart, on becoming flexible and responsive to others just as one is responsible for oneself, and this concept of grace goes beyond the idea of morality as we usually express it in the law – as important as the rule of law is to freedom.
Posted by Bill Boushka at 12:16 PM