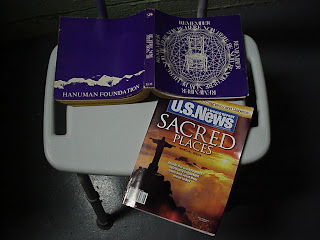 In 1980, I visited the Lama Foundation over Labor Day weekend with a quick weekend fare from Dallas to Albuquerque on Southwest Airlines. I drove the rent car north through Santa Fe and Taos, up a dirt road onto the west side of Wheeler Mountain (essentially what becomes the Rocky Front Range farther north), and encountered the community at about 8600 feet, overlooking the Rio Grande valley. The first building visible was a two-story log cabin with the words “remember” and the first sound was women humming as they cooked organic food for the evening’s Succoth feast.

I was attending the weekend “writer’s conference”. We slept on sleeping bags in cabins, and sat around and wrote essays longhand and read them (they might be like today’s blog posts).

The Foundation had many other activities, such as “Purification by Fasting,” which I passed up. But in May 1984, I went back for part of the “Spring Work Camp” which attracted people from all over the western states. This time I had a week’s vacation and drove my Dodge Colt from Dallas. The access road could get muddy after any mountain thunderstorm, meaning a cleaning of the rotors when I got back to civilization at Espanola.

I heard that the colony was destroyed by a wildfire in 1996, but a recent issue of U.S. New and World Report, Nov. 26, 2007, in a special issue called “Sacred Places” discusses the rebuilding of Lama on p 40 (the essay by Jay Tolson in “A History of Belief: A journey through New Mexico offers glimpses of old creeds and insights into contemporary spiritual quests). There is a picture on p 38 of a meditation shrine, with the brush beginning to grow back below on the mountainside. Taylor discusses the book Remember: Be Here Now by Ram Dass (aka Richard Alpert with the "Hunamun Foundation" -- curiously, it has no ISBN; many pages are in a graphic script), which dates back to about 1978, and describes life at the commune, along with various spiritual practices and rituals.

The magazine has a stunning array of photographs, including Tiahuanoco, Bolivia (the magazine spells it Tiwanacu), a place that the van Daniken crowd attributed to UFOs or aliens, a pre-Inca city near Lake Titicaca, the highest navigable lake in the world. There are some stunning pictures from Cordoba, Spain (the mezquita). I didn’t see any mention of the (AMORC) Rosicrucian Egyptian Museum in San Jose, CA.
Posted by Bill Boushka at 12:03 PM