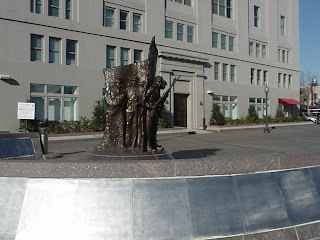 Before getting to the main topic, I note first that the January 2008 issue of Vanity Fair has an interesting article by Cullen Murphy, “Lines in the Sand,” about what the Middle East would look like the political entities tracked to ethnic and religious reality. There is a map drawn up in 1918 by Lawrence from the British National Archives, on p 62, and a “Below the Surface” tribal map on p 63. The magazine does not give a direct link to this article and I suppose I can’t publish home photos of these, so you’ll have to buy the magazine (after all, they have to pay their employees, etc). But history teachers will love using this article.

However there is a direct link to Sebastian Junger ‘s report “Into the Valley of Death” about the current military activities in Afghanistan, which seem every bit as dangerous as those in Iraq, as when he discusses the harrowing risks of getting wounded soldiers to safety (also an issue in Tom Cruise 's new film "Lions for Lambs"). The link is here: and there is free "on location" video there to watch (appropriate when "Kite Runner" is finally in theaters). War correspondence requires real military skills. Junger had reported on Afghanistan even before the 9/11 attacks, when he reported about destruction of Buddhist shrines. He was heavily involved in reporting Massoud and the Northern Alliance just before 9/11. He is also known for his books “A Perfect Storm” (a movie in 2000), “Fire” (about dangerous occupations) and “A Death in Belmont” (a subject of a CNN 360 report). When I discussed “Perfect Storm” on an AOL movies message board in 2000, I drew angry comments from someone who resented the fact that I talked about the fact that the fishermen had to take their boat through the storm and deliver the fish or not get paid. (He thought I insulted working people. No, I just talked about what happens in the book and movie.) I met Junger at a booksigning party at an independent store in downtown Minneapolis in the summer of 1998 (for "A Perfect Storm"). I recall reading that he had “paid his dues” by working as a logger or tree trimmer, when he was once severely injured by a saw. He was interviewed on Larry King Live once in his NYC apartment, and I recall a cat jumping into the picture.

It’s interesting to look at the writing in professional articles. War can change our language. He uses Taliban as a plural noun (meaning a collection of individuals). Later he uses “Russian military” the same way. Wikipedia talks a lot about English as an analytic language, compared to all other major European languages, and how tricky it is to use word order, pronouns, particles, auxiliary or modal verbs to convey precise meaning that other languages accomplish with endings and inflection. It’s interesting to formulations (like “alright” instead of “all right” in a lot of foreign film subtitles) coming to be accepted as correct because they seem more natural in international use. Proofing in formal written English is still tedious and very tricky; grammar checks don’t catch everything when they don’t have inflection rules to go by. In my book I let this one get by: “"Algebra invokes the manipulation of symbols as surrogates for numbers or objects. As a child, it had sounded like a great mystery, doing arithmetic or `figuring' with `letters' rather than numbers,” when the “it” needs to be “the subject”.
Posted by Bill Boushka at 11:29 AM