Primack & Abrams: The View from the Center of the Universe 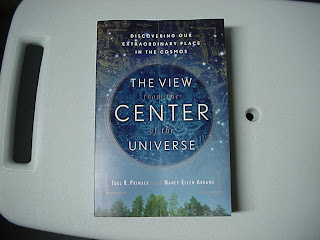 The authors have appeared on the McLaughlin group, and they seem to express as broad and objective view of cosmology as is possible. They explain the various components of the universe as different levels, drawn on a Cosmic Density Pyramid. Some of these are various kinds of clusters of galaxies, down to the galaxies and stars (and black holes), solar systems, planets, and then the stuff of ordinary matter and energy. It takes a lot of effort to reconcile quantum mechanics and general relativity, and a theory called supersymmetry has been advanced to do that. Concepts called dark matter and dark energy are part of the universe that we don’t relate to directly but are necessary parts of the big picture. Dark matter may be related to neutrinos – and I remember a high school physics teacher back in 1960 saying they have no rest mass. That’s more or less the case, if a simplification.

Perhaps the central concept of their book is the place of terrestrial life in the universe. Biological entities are mid-sized and “right sized,” relative to the scale of other things in the universe, for biological processes to work. (That has a lot to do with the "center" which is symbolic and not geometric.) But for creatures like human beings (or perhaps bonobo chimps or dolphins or orcas) to have evolved over the 14 billion years of the history of the universe, and 5 billion years of earth, there has to have occurred a long sequence of catastrophes and rebirths, letting consciousness evolve as a tool of reproductive advantage, almost in a thermodynamic sense.

That’s what makes finding other intelligent life, as we normally present it in science fiction, so problematic. In calculus there is a theorem called l’Hopital’s Rule, where one differentiates the numerator and denominator of a rational function and tries taking the limit of a quotient, to get at the tendency of a process that otherwise is unknown. Trying to estimate the probability of life like ours somewhere else is like that. We keep differentiating and taking limits and probably don’t make much progress, because of the range of scales involved. Relativity gives us some paradoxes that might allow trips of hundreds of light years within a lifetime (time dilation), to return many generations later, presenting social and political problems unimaginable now (except to science fiction writers). But the likelihood of finding civilizations comparable to ours even within a hundred light years or so seems guarded, to say the least, according to the authors, who survey the whole science of other solar systems. Rather, it’s more productive to take on a more “spiritual” view of our centrality in the universe, in terms of size. Just as the atoms that make us up are individually unimportant (and the atoms themselves are “made up” or probabilities or energies that seem irrelevant), individual creatures could be building blocks of larger wholes in the cosmos. One could imagine a theology from this: “Heaven” could involve coming into contact with everything that makes the biggest objects in the universe work the way they do. But one would have to earn the right to be there. This would get into religious or ethical concepts like karma and salvation -- and I think a lot of people abuse the idea of "salvation by grace", by expecting others to let them off the hook.

This also leads to some view of moral philosophy. In concept, the authors seem to accept the idea of public morality. One must not engage in behaviors or goals that undermine the long term integrity of the group. One must reconcile following one's own goals with the viability of the entire family and all of civilization. On a local level, this could sound like traditional religious ideas of “family values” or tribal or blood loyalty. But the authors suggest that we need a much broader framework in which to contemplate our moral thinking, although they are not real specific. Their concerns are more about taking care of the planet, and leaving it a suitable home for future generations, than about loyalty to one’s specific children. People can conceive of the idea that their own children should have better lives than they did – but not what descendants millennia down the road will be like, and those are the time scales we must deal with. The authors consider our civilization a treasure for the universe, and probably near the end of its rapid growth; it must find a new kind of stability and steadier growth. That observation has intricate consequences for how we look at fertility, population replacement and family size -- the planet may be at well over half its carrying capacity now, but human beings must continue to be born and grow up.

In 1968, I remember seeing the film "2001: A Space Odyssey" and wondering how long it would take to generate real space travel. 2001 turned out to be a very different year from what was shown in the movie. But in the 1990s something else remarkable happened: the Internet was made available to the public, allowing a new topology (or measure) of communication that I had never imagined when growing up.

Perhaps the larger structures in the universe (the galaxies, quasars, etc) express consciousness in a way that somehow parallels how biological structures express them in our familiar world. But we will have to earn the right to tap in to this kind of consciousness. We can fail, and we can lose it.
Posted by Bill Boushka at 7:27 PM