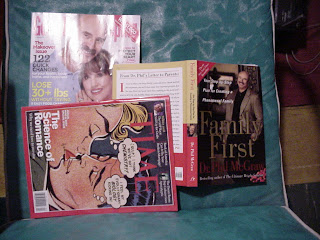 Dr. Phil, of course, is very well known for his guest-oriented television show weekdays, where he often invites guests with serious behavioral problems and then chastises them with his own moral ideas about personal responsibility. (He is particularly hard on moochers, whom he chastises to take any job they can get and then move up like everyone else has to – but in practically every case, the moochers he has presented have already had their own children, often outside of marriage. The problem is bigger than that.) Recently, as we know, his visit to Britney Spears generated controversy, particularly because he talked about it publicly.

This book is a typical “how-to” book and it is bit of a “feel-good” primer. It is addressed to a particular universe: married couples with children. It presumes that parents have to turn much of their personal attention and consciousness toward raising the next generation – their own children. It contains many survey results in gray boxes, and the first result is that, given another chance, many adults say they would not have had families.

That brings up an auxiliary concern, that Dr. Phil does not go into here, and I have not seen him delve into it much in his show. What about the responsibilities of those who have not had children? What about connections between them and their aging parents, or siblings? Must they put "family first" or will they? What about this, Dr. Phil?

Of course, within the typical family, parents are right in “socializing” their children to fit in to meeting the needs of others, even when others present kids with goals or demands that they would not have chosen to meet. After all, children are minors, parents are responsible for them, and children need a grounding of society’s give-and-take expectations before they will know how to take full responsibility for their choices as adults. (Dr. Phil points that out – your child is an adult in the making.) But it’s natural to extend the same question to adults on the periphery of the family. Dr. Phil does suggest that kids do volunteer work and even work on political campaigns to learn the responsibilities of democracy.

I didn’t see any discussion of gay teens, or of how parents should handle them. Of course, teens should not have sex, etc., but that doesn’t deny the fact that heterosexual teens date, so the question of "what with gay teens" logically would come up. In fact, in my own senior year in high school, I didn’t go to the prom because I wasn’t interested; instead I went on a Science Honor Society field trip to the top of Mount Washington, New Hampshire (certainly appropriate for high school), meeting the same psychological need.

Dr. Phil is reported to have said that gays are born wired the way they are, and here is a reference.  There is a particularly disturbing attack on Dr. Phil on this in a review of an interview that Tim Russert gave him, here.

The February 2008 issue of Good Housekeeping has a picture of Dr. Phil and Robin on the cover, with the article “5 Secrets of Happy Couples.”

The January 25 issue of Time has an “Annual Mind & Body Special Issue”: “The Science of Romance: why we need love to survive.” The article, by Jeffrey Kluger, admits that in particular societies, adults seek adults of the opposite sex who will give them the “best” children, by smell, and looks (yes, even in today’s buff-oriented media culture some women like hairy chests, as well as height and deep voices), parameters which can change in fashion with the environment and times. There is an article by Lori Gliwenstein, “Marry Me,” that explains how married men live longer than single men, even if some men put on weight and pot bellies when getting married (everybody said that when I was in the Army). The one place where one sees little adult obesity is a gay disco floor. There is also an article by John Cloud, “Are Gay Relationships Different?”  Yes!
Posted by Bill Boushka at 7:04 AM

This review is terrible. Your english is bad. Your suggestions are bad. Wow. What a waste of my time that was to read half of it.

At least this particular review has a lot of page requests over time. I think "Anonymous" was outnumbered.