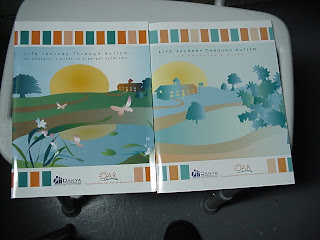 At the recent health fair in Washington DC Jan. 12-13 (entry Jan. 13). I found a booth on autism, and much of the available literature had to be requested free by mail. I had reviewed a book on Asperger syndrome by John Elder Robinson on this blog in October, here.

I received two large paperbacks from the ("OAR") Organization for Autism Research in Arlington VA and Danya International in Silver Spring, MD. Neither booklet had an ISBN.

The second was more specific. It is titled, “Life Journey Through Autism: An Educator’s Guide to Asperger Syndrome,” 88 pages, large paperback. The authors are Brenda Smith Myles, Diane Andreon, Kristin Hagen, Jeanne Holverstott, Anastasia Hubbard, Sheila M. Smith (all of these from the University of Kansas) and Melissa Trautman from the public school system in Overland Park, KS.

The booklets are very much directed at teachers as the audience. These would include both regular classroom teachers and special education teachers. The presumption is those who join the teaching profession will encounter children or students with needs related to these syndromes, and that many students can make considerable emotional demands on the attention of teachers. The occurrence of autism is reported regular in the media, and there is increasing evidence of genetic causes. A few days ago, there was a story of a family with six children with autism or Asperger’s. (The ABC “Good Morning America” story is here.) On Jan. 29, CNN ran a story to the effect that ABC would be asked to cancel a particular show because it perpetuated the idea that vaccines cause autism.

The Asperger booklet publishes a “Six-Step Plan.” It provides many lists and diagrams explaining the syndrome. It seems to present the syndrome as more severe than do other sources. Asperger is still considered a “pervasive developmental disorder”. For example, the booklet reports that academic difficulties (particularly with abstract concepts) are commonly encountered with Asperger’s syndrome. Some behaviors by children with the Syndrome may seem indulgent or self-serving (the “little professor syndrome”), but they are not willful and they have a biological, neurological basis. However, many media reports characterize a large portion of the Asperger population as academically proficient, sometimes gifted, often inclined to pursuits with computers, music and art. The converse of such an assertion is definitely not true, however. Many artists and intellectuals (despite popular myths coming from “Silicon Valley”) exhibit no developmental symptoms.

ABC World News Tonight has a report by John McKenzie, "Autism Breakthrough: Girl's Writings Explain Her Behavior and Feelings; Doctors Amazed by Carly Fleishman's Ability to Describe the Disorder From the Inside," link here. The story concerns a 13-year-old who can communicate quite articulately by computer but cannot speak. The story has an embedded link to ask her questions.