Jesse Ventura: Don't Start the Revolution Without Me (review) 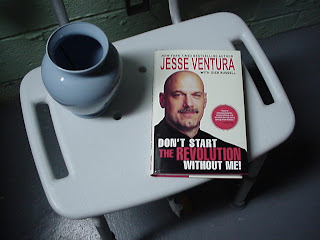 Ventura, of course, hit center stage with his at-the-time shocking win of the Minnesota gubernatorial in 1998, with the Reform Party. I remember the election night party at a tavern in St. Paul, and a particular LPMN member cackled as Ventura pulled ahead, and left both Republican and Democratic candidates severely behind. (He had previously serves as mayor of the Minneapolis suburb of Brooklyn Park.) He was thought of as “libertarian” but is not always consistently so. He recently appeared on Larry King Live and made appropriate criticisms of the hegemony of the Republicrats. (Discussed here toward the end of the posting.)

The book is told from the “present tense” of his sabbatical in Baja California (Mexico), away from cell phones and most of the modern rush of civilization. In each chapter, he gives a retrospect to an important episode of his life. The organization causes the book to lend itself to docudrama film-making. Will we see a movie, perhaps?

The most obvious episode is his governorship, and the implosion of the Reform Party when Pat Buchanan took over. He indicates that the leadership of the party could have taken it into a viable third party option for the American people, but instead let it lapse into petty squabbles. He also agrees that Perot might have won in 1992 had he not acted like a baby for a while. The promise of Perot’s candidacy has been forgotten. He argues for abolition of the Electoral College. When I moved to Minneapolis and became active in the LPMN subsequent to my book’s promotion of cable TV, the Reform Party tried to get some of my attention.

Not always was he “libertarian” in the strictest sense, and he even suggests that libertarianism can encourage anarchy. He helped put in the Minneapolis light rail system, which was being built when I left (one terminal is in Uptown, near the Landmark theaters). He says that in the early 50s, Minneapolis had the best streetcar system in the nature, but it got torn up by the automobile lobby. He offers interesting accounts of travel to China and Cuba, and believes that China is rapidly westernizing.

He describes himself as fiscally conservative and socially liberal, a combination that makes common sense but seems difficult in American politics. He says that the combination of big business with religion threatens to create fascism, which he believes has already come into being in the United States under the current Bush administration.

He sees most laws regarding “public morality” such as drug laws, and in the past laws targeting gays, as inspired by religion, and says that government has no business regulating private consensual behavior, only letting people reap the consequences of their own bad behavioral choices. This is a philosophy of, as I once called it, “consequentialism”. He believes that the state should recognize civil union contracts (including same-sex couples) but “marriage” as such. He doesn’t get into the “institutionalist” debate over marriage, but it is clear than many people see external social rewards and even “preferences” as essential to keeping marriages stable and able to raise children.

He offers some interesting theories about great catastrophes in history. He offers some analysis that suggests that Lee Harvey Oswald could not have acted alone in the JFK assassination. But his remarks would need to be compared carefully to details in several documentaries and books (by Posner and others) that claims that the JFK is a “case closed” and that it is proven that Oswald acted alone.

Likewise, he offers comments to the effect that 9/11 could have encompassed a conspiracy including the government. He cites specific delays and odd behaviors by the President and Vice-President immediately afterward, and discusses Michael Moore’s film “Fahrenheit 9/11”. These would have to be compared in detail to other accounts.

He believes that Bush’s war in Iraq in self-serving and sees the Patriot Act as a step toward fascism. Yet, he acknowledges that Saddam Hussein did use banking arrangements also used by terrorists. He criticizes the “backdoor draft” (or military “stop-loss” policy) as a sham for a volunteer military, which makes it vulnerable to misuse at presidential whim. He thinks that a draft should be reinstated whenever we go to war for a legitimate purpose. (He doesn’t say what happens to “don’t ask don’t tell” but I can predict that it is repealed.) Of course, using the draft seems anti-libertarian, and it didn’t keep us out of Vietnam. Other commentators, like Jack Cafferty, have supported reinstating the draft in such circumstances.