New alliances in bookstore wars: chains and independents may have to work together 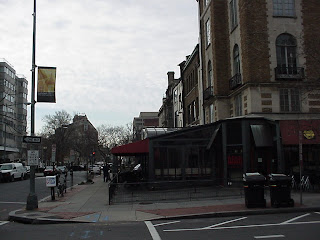 Business, like politics, can generate strange bedfellows. Now, the chain bookstores may be finding allies with independent bookstores in fighting off the “box stores” (Wal-Mart) and, of course, e-retailers (Amazon). Sometimes chains and online stores belong to the same company: Barners and Nobles is both physical and virtual; Amazon works with Borders, and BooksaMillion and Powells have major online stores.

There is talk that Barnes and Noble could buy Borders. And independent stores could eventually be owned by larger chains. Politics and Prose, Kramerbooks (near Dupont Circle in Washington – used to be in Ballston in Arlington but that close), even the G&L chain Lambda Rising could some day become absorbed. Presumably acquiring companies would want to continue the browsey neighborhood atmosphere that independent stores have; many of them have larger collections of very specialized books (as does Kramerbooks with history and politics, and a large restaurant on the premises) that attract “upscale” neighborhood residents. Borders, it should be noted, started as a small independent.

The threat from the “box stores” could be overblown, as they would never carry on the premises the large range of specialized titles. Sure, you can always find plenty of genre (romance and horror) paperback novels even in supermarkets, often discounted.

The Washington Post had a major story to this effect on Saturday April 5, 2008, Business, page D1, by book industry analyst Michael S. Rosenwald, “The Changing Bookstore Battle: It used to be little vs. big guy, then the bigger guys came; link here.

In 2000, I saw a 16 mm film at the University of Minnesota from Avatar Films, "Book Wars", by Jason Rosette, about the lives of people who sell used books on the streets of New York City. I could not find a DVD on Netflix for it yet.
Posted by Bill Boushka at 4:28 PM

BookWars is available on DVD from the publisher's web site: http://www.camerado.com

I hope this helps,