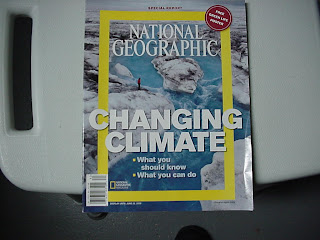 National Geographic offers a Special Report “booklet” called “Changing Climate: What You Should Know; What You Can Do,” 88 full sized pages, heavily illustrated, edited by NH editor Chris Johns.

There are three sections: “Signs of Change” “The Science Is In” and “Solutions.”

The first section starts with “Change Is Here” by Joel K. Bourne, Jr. and the first big illustration shows a coastal house in South Florida. It’s hard to believe that anyone would live that way in the bull’s eye of a hurricane. There is a picture of a coal-fired power plant in Ohio; the low cost and domestic availability of coal, especially through strip mining and mountatintop removal, encourages its continued use and CO-2 emissions in the United States. There is a spectacular picture of a cumulonimbus cloud in Illinois, about to drop a tornado. The desertification picture shows famine in the third world.

The second section is called Science, starting with “Proof Positive” by Robert Kunzig. The report starts with an account of a multiple 1955 measurement of CO-2 by Charles David Keeling as 310 to 315 parts per million. By 2007, it had reached 384 ppm. It is the rapid rate of change in CO-2 concentration – the derivative – that has scientists so alarmed. The average global temperature rose by a little more than 1 degree F in the past century; it may be surprising that it is not more.

The third section features an essay by Peter Miller, “Now It’s Personal.” He covers three families: one in Botswana, one upper middle class family in Las Vegas, and one middle class family in India. The report shows how it may be difficult for many families to make radical changes, even when doing good things in raising their kids. However small changes, like using CFL’s, can have a major impact. The report quantifies the relative carbon emissions of various lifestyle related activities. Driving or commuting certainly emits a lot more than home entertainment, but the whole chart makes one wonder about social priorities in the future. Many people with lower incomes (especially retirees) may have a hard time affording purchasing hybrid cars or retrofitting homes for solar energy.

NativeEnergy makes it possible for people to purchase carbon “credits” now. So far, no one is keeping score. But I wonder about the future.
Posted by Bill Boushka at 7:22 PM