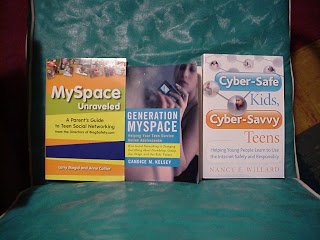 In the past couple of years the media has steadily increased its reporting on issues about Internet safety and teenagers, as a subset and also an extension of related issues for adults, as in the workplace. While a couple of law professors have authored books recently on “online reputation” and on “generativity” as it relates to Internet safety, now there are some books that take up what parents need to know to protect their kids and enable their kids to learn to use the Internet properly. Last week, PBS broadcast a show on this (see my TV blog for May 20, here.) This is a most welcome development.

The author is an attorney and educational consultant. Her book gives a good, narrative overview of all of the major subject areas that parents need to know about, including mechanics, reputation, copyright, bullying, as well as academic integrity. She pays particular attention to the developmental steps that teenagers undergo and the fact that teenagers simply are not capable of understanding the long term and subtle consequences of their actions until they have matured enough, biologically, socially and in terms of educational progress. Of particular concern are symptoms that kids are trying to “hide” Internet activity. She recommends that parents draft agreements with their kids, and gradually allow their kids more freedom as they show they are ready for it. The process is a lot like learning to drive a car. Her points are level-headed and not alarmist or overly “moralistic.” She makes an interesting point that our society encourages a system where consumers get a lot of media content free in exchange for seeing advertising, some of which (both content and ads) is not always age appropriate.

The author has another book on cyberbullying which I have ordered and will review later.

The author is a middle school and high school teacher in the Los Angeles area and works on academic placement issues. Right from the outset, her book is a bit more concerned with the social and values context of the Internet issues, some of these of considerable concern to adults as well. Her experience seems to be that a teaching career means a certain kind of life, kid centered, and she is much more concerned about attitude and inference than the first author, whose background is more with the law itself. In her introduction, she talks about teacher participation in “TV-turnoff week” at school, which harks back to the time a few decades ago when teachers had to encourage students to “read, don’t watch television.” I remember that in my own junior high school in the 50s. But now, turning off TV means turning off computers, too; and computers have a legitimate place in education when used properly. She notes that kids brag about getting around the “Lenten fast.”

She then goes on to discuss the way Myspace has, for kids, provided a preferred “reality.” She notes that many kids equate Myspace with the Internet – a false comparison, but Myspace used to be more permissive than Facebook, which was more oriented toward college and adults in the beginning. Further, a certain generation of teens did “come of Internet age” with Myspace, not realizing that even ten years ago there was a robust life on the Internet with older forms of conventional websites (which I grew up on, coding a lot of raw HTML). She points out that kids (especially girls) present themselves unfavorably on their profiles, for no rational motive, unaware that future schools and employers will find this material.

The problem is that for some kids, the Internet provides a more successful “existence” – especially socially – than “real life”. It’s not such a problem for kids with “real world skills” for expression, like sports, music, drama, chess, debate, etc. (I’m reminded of the California teacher who came up with “Freedom writers”.) It may not be a problem for kids who do well in school, or even for kids who come up with legitimate business ideas or innovations on the Internet and make real money. But for others it is an escape.

And, she approaches the area of family values – parents generally want to socialize their kids to have the practical skills and empathy to function in the family unit (hence the Mormon “family home evening”), and a technology that lets kids (or adults, for that matter) escape into a parallel “dominion” is certainly a potential impediment to socialization. However, this sort of issue should be resolved within the family, not by a school district or individual teacher. (Private schools might work differently on this.)

Apart from that, she winds up giving the same general advice as Nancy Willard. It's easy to examine some extensions. Parents can make themselves "friends" and recently a few police departments have offered to do so, however teachers should never interact with student profiles without permission.

This book was mentioned in the PBS NOVA program and does focus on Myspace. It gives detailed illustrations of Myspace input and output the way a systems analyst would present it in a systems specifications document. The purpose of that is to guide parents through all the details of setting up and using Myspace and monitoring the child’s activity. The authors show some confidence that Myspace (which belongs to Fox) now has strict policies about acceptable use and improved privacy options, comparable to that of Facebook. All the authors point out that private profiles can be circulated and that the manipulation of friends lists can be a source of social stress for immature teens. Also, a small amount of material even from a private profile can be seen by the public (without being added as a Friend). 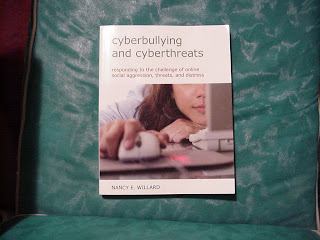 Nancy E. Willard. "Cyberbullying and Cyberthreats: Responding to the challenge of online social aggression, threats, and distress". Paper, 9x11, Research Press, 308 pages, is a detailed “hand book” for dealing with bullying, written for both parents and particularly school administrators and school districts.

The subject matter intersects two issues: bullying as it would occur in the real world, and the Internet, which can make things very public. In the early part of the book, she distinguishes between various kinds or bullies and targets. A disturbing portion of this occurs just out of “social climbing.” It seems to reflect an overly competitive view of life, and that “might makes right”. Other bullying occurs as a reaction from people who are bullied themselves. Girls may be more likely (than boys) to use "relational aggression" than boys and the Internet and social networking sites may facilitate such behavior. She discusses social interaction and empathy, which she describes as having both cognitive and affective or emotional components. She spends some space on a surprising problem of bullying by teachers of non-conforming students, and this behavior may go on a long time and not be criticize by school officials. A typical recent example (not in the book) concerned the Florida kindergarten teacher who late other kids "vote" an autistic child out of the class (the teacher was removed from the class after complaint from parents). She provides a brief but balanced treatment on the problem of mistreatment (whether by students or teachers) of students based on perceived sexual orientation or gender non-conformity, and recognizes that students and parents often do not report this behavior and that school administrators have difficulties dealing with it.

She also discusses the complexity of problems that result from kids’ use of the Web (including use from home), leading to problems already discussed widely on this blog. School districts must deal with both on-campus use of the web, and the likelihood that hostile use off campus will disrupt the school environment and create risks. There is a history of litigation that determines how First Amendment rights are balanced against the need for order and discipline in schools, both from speech on campus and sometimes off campus. There are many relevant cases, such as Tinker and Hazelwood. The mere mention of a personal website, profile or blog sometimes can lead to the legal pretext that inappropriate communication has affected the campus.

A particularly disturbing area is the examination of student profiles or blogs on the web for “leakage” (“implicit content”) or writings that indicate risk, especially from a student who has been bullied.
Posted by Bill Boushka at 8:42 PM

Cyberbullying seems to be getting a lot of attention lately, and rightfully so. However, there are several other dangers that kids face online. One good free online book I've found is OnlineTeenDangers.com. It covers everything from sexual predators to buying drugs online.