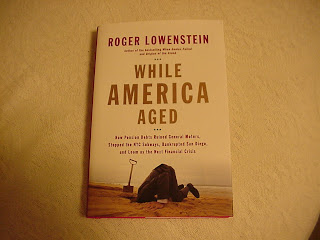 Before beginning the review, I note an irony, in that the title reminds me of the title of a recent book by Bruce Bawer "While Europe Slept" that is also about demographics.

The full title of this book pretty much tells its message and table of contents. The overall message is compelling, but the history of each of the three crises is filled with minutia, typical of history books dealing with social issues.

The underlying big problem should be obvious by now. It’s demographics. People are living much longer, so any defined benefit pensions have to be paid out much longer. Back in the 80s and sometimes in the 90s, companies bought out highly salaried workers in their 50s. It became almost expected to “retire” early in one’s late 50s, and then start some second career, perhaps one’s passion, but possibly having to sell stuff.

The right wing talks a lot about the dangers of having fewer children (especially in certain social groups) and about “demographic winter” which is said to be happening already in Europe. But as for pensions, the bigger problem is really that employers don’t keep people working at fully salary or wage long enough. We could afford defined-benefit pensions if people worked 40 years, into their 70s. Companies could do that if people stayed healthy enough with lifestyle changes, and if economic and foreign policy were sound (which they obviously are not). In such an environment, fewer children could be a desirable development.

The first part of the book is about GM, and the history of Walter Reuther, and then the “anti-Reuther” later. In the beginning, men didn’t retire; they kept on working and their families took care of them, and they probably didn’t live long after they couldn’t work. The idea of been compensated for an industrial accident was scoffed at (the book mentions Reuther’s losing a toe). But gradually the concept of retirement grew, and eventually was supplemented with social security. The social security offset would be subtracted from pensions, but this practice would be resisted. Labor unions started demanding more. Companies like GM tried accounting tricks and spinoffs (Delphi) to handle the mathematical problems. Eventually, defined benefit pension obligations became so onerous that shareholders lost control of the company. Of course, union members can vote only for their own representatives, not for the owners of the company (except when companies are employee-owned).

The other two sections of the book deal largely with public employees, who can vote out their public officials, and whose employers “must” pay up, resulting in future large tax increases. The New York City transit system started with separate transit companies that offered few benefits for dangerous work in the beginning. But over time, city unions became powerful and eventually extended to other areas, like teachers (whom John Stossel has reported as impossible to fire in New York when incompetent). New York City went through its Financial Crisis of 1975, when I was living in New York and working for NBC as a (non-union) computer programmer. I remember that an office mate actually bought a “Big MAC” bond. And I remember the “Ford to City: Drop Dead” New York Daily News headline.

The San Diego portion also covers the accounting gimmicks, and how they came apart in the wake of private accounting scandals (like Enron) and how the affected city politics. California has been affected by the use of referendum to stop tax hikes. This was a public sector problem in “Republican” territory, with its own flavor.

One major contributor to the pension factor in private industry is that newer companies do not offer defined benefit plans and do not pay premiums into the Pension Benefit Guaranty Corporation, which can itself run deficits and need a taxpayer bailout. Existing pensions are covered by ERISA, but companies can cancel them in some circumstances involving buyouts or bankruptcy, and PBGC pays only a portion of the pension to the retiree. Companies have sometimes been stricter about retirees working for competitors after retirement.

The author points out that retiree health insurance, which covers the retiree from early retirement up to age 65 when Medicare eligibility starts, is itself a bit of an anomaly, and gets weaker all the time as medical costs rise and ability of companies to fund the insurance diminishes. He believes that all Americans should be covered by a kind of Medicare, with partial coverage by mandatory premiums and assistance based on income. That is, he supports a modified ingle payer system with a Canadian style approach to personal choice of doctors.
Posted by Bill Boushka at 4:12 PM