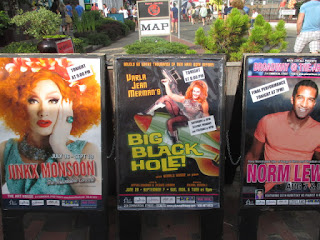 I recently reviewed the history of Bowers v. Hardwick and Lawrence v. Texas on by glbt blog  just before I learned about Dr. William Eskridge’s new book on the subject. So, here we go again, delving into an area that disturbs a lot of people, with a certain detachment, trying to educate people to become aware of how they think about sensitive things.

First, let me recap what my perception of the anit-gay hostility in the legal system as I came of age with it. To me, it seems to say something like this: if you want to be a first-class citizen with full legal rights, you have to share family responsibility. That usually means you must marry and have kids, or try to. That’s an essential obligation of living in a “free country.” You owe it. You need to develop the gender-specific skills to do this, before doing what you want with the rest of your life. That is how if came across to me. Now, there is a lot wrong with society’s wanting this (which in large measure it still often does). For one thing, it’s obviously not good for the stability of marriages if people get married because they have to. (Think about all the jealousy rings in heterosexual soap operas like "Days of our Lives").

Nevertheless, that is how it seemed. It was a paradox, because so much of the early party of life – school, and the college – is about establishing yourself, your expression and “worth” outside of the family. Then, you’re supposed to fall in love and take on the responsibility of continuing life. It sounds like the script of the 1955 movie “Marty.”

And, even if you don’t reproduce yourself, your’re supposed to be loyal to your biological family, and drop everything and put them first in your life. I repeat – I say all of this in the subjunctive mood (clearer in other languages than English).  The book, now, is

It is a monumental volume, somewhat relective of the two big books on gay history by Randy Shilts, but a little denser and more technical. Eskridge, for example, covers some of the anecdotes related to the military gay ban (like the Newport bust in the 1920s) that Shilts did in "Conduct Unbecoming". Eskridge would probably concur with my “view” of the problem, although he would say that it is a particular view, often found with people who came of age during the era of McCarthyism and the Cold War, when homosexuality (especially in men) seem to be targeted as of the deepest moral threats to the nation. It is right to wonder why this happened, as it doesn’t make a lot of sense to the modern person used to the mores of individualism.

Eskridge traces anti-sex laws back actually to colonial times. He lists some concepts like disgust, the “ick” factor, “pollution”, and “destabilization.” What this refers to is a belief system that transcends any modern concept of “personal responsibility” and establishes a set of background community values that most men and women believe that they need in order to function well as parents in lifelong committed and "active" marriages, with the lifelong "mandatory" intimacy that marriage produces. The belief system is supposed to make marriage and family life “worth it.” Puritanical attitudes toward the family were pervasive, and expressed in such vehicles as Comstock's laws regarding the mail, but did not necessarily target homosexuals until well into the 20th Century. Eskridge traces the cultural paradigm shift with some jargon that he invents: the transition from procreative marriage and compulsory motherhood (both "white"), to "companionate racially pure marriage and compulsory heterosexuality" (p 82). He could have mentioned the Vatican idea of mandatory complementarity.

As the book develops he often mentions forced conformity.With the ideas of Freud, a more “pseudo-utilitarian” idea developed, that individuals had a moral duty to make their sexual expression “productive” --- that is, quasi “reproductive.” Family rearing involves taking risks, and everyone should share the risk and responsibility. The obligation exists with any sense of sexual pleasure at all; it doesn’t wait until one has created a baby. So the state would have a legitimate interest in channeling sexual energy toward procreation and family responsibility, and in discouraging "nihilistic" sexual expression for its own sake.

Gradually, more individualistic ideas of liberty took hold, and gradually these ideas influenced how many concepts related to the Bill of Rights and Fourteenth Amendment should be read. The scope of the effect of sodomy laws was coming to be understood. One issue concerned the idea that they were mostly enforced in non-consensual situations, involving minors and rape. But there was also the idea that state acceptance of consensual homosexual relations would influence minors and discourage the formation of families in the future.  To a modern person, this kind of thinking sounds self-defeating and self-contradictory. By deferring to prejudice and commonality, it undercuts the idea that people should be strictly responsible for their own choices. But, traditionally, marriage and family has not been viewed this way. The institutions grew up in a world of external threats, where families (and communities) needed internal loyalty to survive. Families often believe that familial authority creates "right" regardless of the "truth" about some particular circumstances, and this belief seems important to family function (even more so in totalitarian societies like radical Islam). So men believed they were entitled to a cultural climate that supported their sense of “power” and “masculinity” collectively. This sort of thinking would run into logical contradictions when dealing with men who were less “competitive”, but society was afraid of the social implications of “upward affiliation” (and its effect on other men) and preferred to see such men get married and have kids themselves rather than “compete” and “monitor” the whole system from a distance.

Ultimately, anti-gay policies and laws had a lot to do with “protecting” the nuclear family from the logical consequences of competitive individualism. Did they work? Well, they didn’t prevent a lot of bad things, and sometimes encouraged them. Eskridge gives some space to lynchings and relates racist attitudes to anti-gay laws.  Eskridge covers the legal battle over these laws in detail, taking us through all kinds of history: Mattachine, Frank Kameny, Stonewall, into the 70s, AIDS (he could have covered the attempt to strengthen the Texas sodomy laws in 1983), and then Bowers v. Hardwick; and finally; Lawrence v. Texas. (I give the links to the opinions in my other post, link above). My own expulsion from college in 1961 occurred in a time of almost maximum McCarthyism-related “terror” against gays as part of the “enemy” of the “family” in a free society.

One key point is why privacy with consensual sex was never a “fundamental right” unless associated with marriage and procreation. This was, first, because of a belief that families needed a cultural climate that supported the demands made of them in daily life, and secondarily because of a later belief that family responsibility belonged to everyone. Of course, one can get into debates about originalism (and Eskridge covers this), but the real problem comes down to this.  Eskridge warns that the battle for gay freedom and equality is far from over, and the Lawrence opinion, contrary to the fears of Justice Scalia, hardly comports with any “gay agenda.” He, like Jonathan Rauch, advocates that gays take stability and family and community responsibility seriously. He does spend some space on gay marriage and especially gay adoption and custody (the Bottoms case in Virginia, and the laws in Florida banning adoption by gays). Sharing of risks and obligations is a serious moral issue, but it ought to be faced for what it is and debated directly – when talking about the military, national service, and filial responsibility, and even the effect of the Internet on families. Sodomy laws used to provide a facile an lazy cover for real issues. They are gone, thankfully.
Posted by Bill Boushka at 2:51 PM