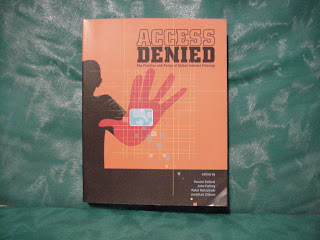 This is an important professional and technical book on Internet filtering and government control, overseas and in the United States. It is reference-like with bibliographic notes at the end of each section and many editors and contributors. It’s useful to begin by listing the individual essays and authors.

These chapters are followed by regional and country-specific overviews.

The essays present a wide range of motives for filtering and censorship, and a wide range of techniques for doing so. Often, specific domain names or IP addresses are blacklisted because of the presence of objectionable content. Users may be tracked and monitored and sometimes pursued. Speakers and bloggers may be arrested and imprisoned. Blogs, as compared to conventional sites, get additional attention because of the ease with which they are published, indexed and self-syndicated.

The motives for censorship vary. China is well known for suppressing criticism and political dissent. Muslim countries are well known for objection to criticism or Islam (or various misrepresentations of Mohammed) and for “sexual immorality.” Some countries like Singapore profess sensitivity to “public morality.”

Many interesting observations come up, particularly with respect to blogging. In a few countries, Blogger and perhaps some similar services are blocked altogether. In others, bloggers often self-censor or must agree to stay within certain topics. Moderators and service providers sometimes take down “gray area” content because of fear of blockage. In the United States, DMCA “safe harbor” takedowns occur when there is no real copyright infringement. The law even in western countries has gradually migrated toward forcing private telecommunications companies to participate in the filtering process, with less than perfect results.

I have always asked myself a rhetorical question: what are these governments afraid of? Isn’t censorship an admission of illegitimacy? Yet, many of the cultures have carefully “rationalized” systems describing the proper “moral” relationship between the individual, his religion (sometimes) or society. States tend to believe that strict control of individuals guarantee stability and that everyone is taken care of to a certain standard required by their particular social or religious cultures, often in the context of the family. In their view, allowing individuals to transcend these rules with personal dissent causes others to be abandoned, and in some sense that may be true.

There is another aspect of the “free entry” mechanism of the Western Internet, with the user-generated content, that some persons may find this opportunity provides a convenient way avoid unwanted real-world relations with other people. This concern has surfaced in the discussion of the “dangers” of social networking sites. Governments may sometimes believe that excessive “freedom” undermines real world connections that they think are necessary for stability, or governments may try to abuse this kind of idea. . Freedom sometimes does mean accepting imperfection and the possibility of instability.

The last chapter does discuss the various paradigms for the relation of the new modes of instantaneous global broadcast. These range from “global civic networks” to the “dark net,” the later of which includes various scams, “cheats” (like spam), and recruiting into radical activities (whether radical Islam or perhaps other forms of extremism) which seem to appeal to young men and others who don’t feel strong personal connections to others. The use of the Web for radical recruiting does express certain internal contradictions which governments can also use to clamp down on it.
Posted by Bill Boushka at 12:37 PM