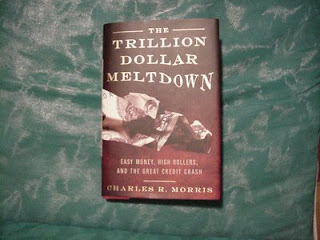 It isn’t hard to guess from the title what this book is about, starting with the current subprime crisis. Indeed it is, and it compares the crisis to a number of other fiascos all the way back to the 70s, such as the Arab oil embargo, the recession in the early 80s, the great 1987 “Black Monday” stock market crash, the S&L debacle, the Enron and Worldcomm debacles, and the latest mess with mortgages, credit and high oil prices. In fact, when the book went to press, the ability of municipalities to get highly-rated insurance for their bonds was coming into question.

The early part of the book traces the economic history of the last half of the previous century with some vigor. It brings back recollections, and it even recalls the spirit of my own first DADT in places. Morris discusses the economic malaise in the early part of the Nixon presidency, which accompanied the discontent over Vietnam. Nixon, almost acting like a quasi-benevolent dictator (he was not so benevolent, as we would soon learn) institute wage and price controls in 1971, and soon floated the dollar. Morris claims that the oil shocks starting in 1973 were more a result of this action than of Arab anger over Israel’s aggressive behavior. He believes that Carter’s appointment of Paul Volcker to the Fed was a necessary move to reign in on the inflation of the late 1970s. But what would follow was a curious cycle of deregulation (as with Reagan) and sometimes reregulation that would lead to our current mess.

The basic genie that has refueled these crises is a financially permissive climate that allows financial “professionals” to insulate credit grantors from risk by “securitizing” the obligations with financial instruments of increasing complexity. We know the buzzwords: hedge funds, derivatives, CDO’s, and so on. Doing so with mortgages enabled issuing supersized loans (I think Morgan Spurlock would like this) to less than creditworthy homebuyers. In the later part of the book, Morris gives many details of how these instruments work and manage to hide and pass along risk. It sound’s like a kid’s game of “It.” The complexity of the financial instruments is daunting, and people (even in information technology) build whole careers around these devices, that in themselves seem no longer to create any real wealth.

Morris, with some political ambiguity, draws some parallels to the moral questions regarding the increase in the divide between the rich and poor. Education has performed variably in increasing income earning potential, but in more recent years, the “educated” class has sometimes been able to insulate itself from the personal risks that working people take. I can see how one could extend this kind of thinking to arguments about marriage. Some people go through life without taking the personal emotional risks of commitment in conventional marriage and parenting, and that introduces certain imbalances. There is even a further twist to this line of thinking: sometimes people, when they have "families to support," believe they have a license to hide themselves from the implications of what they have to do to make a living -- for others.

At the end, Morris says that we need to bite the bullet and accept the need for more regulation, particularly of activities that are “off the books” of exchanges and that create risks not apparent to credit granters. He offers some suggestions for reforming health care financing, including scraping the employer based system.
Posted by Bill Boushka at 10:32 AM