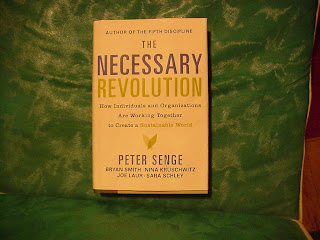 Sustainability, that is becoming the new moral buzzword. It’s easy to imagine that it could become a fundamental individual moral virtue. But this book, while posing it as the issue of our time, casts the problem mainly in terms of what corporate America can do about it, and provides a somewhat optimistic spin.

Senge starts by making the case that we are coming to the end of “The Industrial Age” and will have to enter a new one (Green and Sustainable) in order to survive. Our way of life, and some of the paradigms that make up our social values, must inevitably change. Very early, he points out that our individualistic world has a lot more hidden interdependence than most people can see.

Although the book is heavily organized into a kind of functional decomposition (as systems analysts call it), Senge seems concerned mainly with three areas. One is to understand “bubble” mentality and thinking styles. A second area is how to work within a company or organization and change thinking of others from within; Senge sees this as a quiet revolution to transform “the system” from within, not a grassroots asymmetric effort by maverick bloggers. But a third area overrides everything: the basic measures and values that drive accountability (even in a fiduciary sense for public companies) must change. Senge is not that specific as to what would replace our focus on short term profits as a “measure”; it sounds like the stuff of utopian science fiction (maybe even “The 4400” where the messianic character Collier wants to do away with money altogether). Senge, like Morris, describes how capital markets, through securitization, have overtaken any sense of actual wealth (and book value), but he describes it in more psychological, rather than financial, terms.

Senge does lay out how we keep falling for the same kinds of traps in different guises: the Great Depression, the oil shocks of the 70s, the savings and loan scandals of the 80s, the dot-com bubble, the real estate subprime mess, the commodities shock now. The need for quick short-term profit and a mood of “market fundamentalism” enter the mind and drive all sense of personal virtue, even as, from a longer term perspective, basic ethical sense seems to break down. Other writers and figures – David Callahan, George Soros, and William Morris, have described the same process. Executives tend to see the environment as subordinate to “the economy” but in a real world it is the other way around. He show this and many similar concepts with venn-like diagrams throughout the book.

But Senge encourages a creative process “on the job”, working from within, to win over management (and corporate boards) to decisions that favor long term sustainability. He calls the “creative” engineer or executive who does this within the organization an “animateur”. (Think “le beau animateur” etc., and compare the word to “arbitrageur” from the 80s.) He scatters some examples around, with companies ranging from Coca Cola to British Petroleum. Oil companies would be particularly critical to this discussion, because they must reckon with a totally new model for long term profits from alternative energy courses – while at the same time there are bottom-line incentives right now (even more since the book was published) to drill in remote areas, big time.

Senge uses a lot of four-part “Nolan-type” charts to diagram his points, such as on p. 120 where he decomposes “shareholder value” into pairs of polarized opposites, running from internal to external, and from today to tomorrow. He offers a number of pages headed “toolbox” with practical tips, and also writes some sample dialogues (“screenplays”) as to how to win arguments – and converts – in board meetings. Some of what he gives is just “people skills” – the stuff of “Team Handbook” or “Total Quality Management” from the 90s.

Senge notes questions about sustainability in the growth of the Internet itself. He talks about exponential growth in electricity use, which might be addressed by local renewable sources (like wind turbines or maybe even harnessing lightning) near server farms (which helps explain why Google is building renewable energy into its own corporate planning). But Internet usage, and its tendency to attract "bad actors" because of the "free entry", also can raise sustainability questions (eventually in terms of the profitability of the business model itself, as "free" use and expectation level grows exponentially), which, amazingly enough, have remained essentially controllable by private industry (such as by security companies), even if the road is rocky and scary.

One comes back to the subject of sustainability as a personal value. In the modern individualistic world, that could imply having a personal commitment to members of future generations, like children and family. Yet, our social system has evolved into a world where short term gains mix with a lot of familial tribalism that masks as public morality. Reconciling individualism with sustainability itself makes for an interesting problem.
Posted by Bill Boushka at 7:08 PM