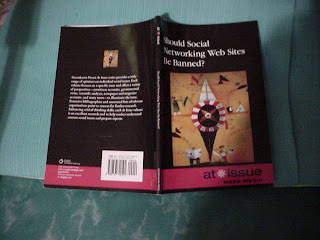 This booklet comes from a series established by a Michigan publisher to present various controversial issues or “debate resolutions” from many perspectives, often organized in chapters with different authors taking pro and con positions on some particular “sub-issue” of the larger set of questions.

The title of the book is a tad misleading. Nowhere does anyone seriously propose that government should outlaw social networking sites. The first chapter, by Rep. Michael G. FitzPatrick (R-PA), does defend the practice of schools’ blocking Internet access to social network sites on school property, and his bill (DOPA) would deny federal funding to schools and public libraries that allow such access. The security problems from these sites are well known. They result from those individuals who have “not the best intentions” when accessing information posted by minors. That in itself is not really controversial and doesn’t get a lot of space. In fact, Chapter 8 by Julia Angwin and Brian Steinberg (“MySpace Takes Measures to Safeguard Minors”) discusses the freewheeling business model for Fox (News Corporation) when it took over MySpace in 2005, as an example of free enterprise that makes money legitimately when used by adults as originally intended but that tends to attract “bad actors.” In fact, Chapter 4, by Domenick Maglio argues “MySpace and Other Social Networking Web Sites Are Dangerous for Children” and writes bluntly “In our fragmented existence, children have little responsibility in helping the family and too much idle time on their hands to create a fantasy existence.” In Chapter 7, in an article from Information Week on C.P. discusses “Second Life” and there is a general concern that the “no capital required” fame possible on the Web can become a problem for adults as well as minors.

What is of greatest concern, and taken up my several contributors, is the potential problems for schools, employers, and even the Armed Forces when various individuals (including students, teachers, employees, soldiers) post potentially compromising or confounding information about themselves and others from home, even using off-campus or off-work resources that they as individuals “own”.

In Chapter 9, the South Carolina law firm Duff, White & Turner, LLC argues “Schools Should Punish Students for Misuse of Social Networking Sites” and argues that school districts should discipline students whose off-campus Internet activity is likely to cause disruption or security problems at school. The firm also discusses the South Carolina “Teacher Employment and Dismissal Act.” The statute has common language allowing dismissal for immoral conduct or behavior that disregards school district regulations. The law firm interprets this code as allowing for firing of teachers for off-campus behavior that “results in a school disruption” or “otherwise negative impacts on the employee’s credibility,” and the law firm believes that school districts should write specific personnel policies expressing this concept. [This chapter appears to be a reprint of an Education Law Publications from 2006 issued by the firm; please refer to the "Major Issues" blog (as on my Blogger Profle) for all the links, in the posting from June 9, 2008.] One problem is that school districts need to give some specific examples as to how they would interpret “gray area” material. Administrators worry that parents or kids may interpret ambiguous material in different ways than urbanized young adults with other outside interests, and may believe it is intended to be enticing even when it is not. This concern goes way beyond the usual concerns about pornography and “adult material” as recently litigated with COPA.

There are chapters on the military (by Erika Morphy and Todd Garvin), but the precept that the military has legitimate security reasons to regulate Internet activity of its soldiers (on and off duty) certainly holds water, even though blogging from combat zones like Iraq is valuable. What, for me at least, is a different issue is the federal law that effectively tries to keep certain kinds of people (gays) out of the military, which goes way beyond speech issues, although obviously social networking and Internet speech can invoke the current statutory law “don’t ask don’t tell.”

The book has articles from the Christian Science Monitor and by Alexandra Marks arguing that social networking sites (and personal blogs) are a boon to direct democracy and the political process, that they encourage political involvement, and promote philanthropy. All of that is true and valid, in the best libertarian sense. The last chapter of the book, by Gloria Goodale, discusses mobile social networking (MoSoSo) which does get students out of their apartments and dorm rooms back into real interaction with others!

But the most controversial part of the book may be Chapter 17, by Larry Edelstein, “Employers Are Monitoring Social Networking Sites.” This has been widely reported since about the end of 2005, and there are many ethical problems. Sometimes employers may identify the wrong person, or be influenced by unsubstantiated material posted by others, part of the “online reputation defense” problem. The article points out that sometimes people have been denied jobs not for self-derogatory material (underage drinking images and the like) but for candor that reveals their true intentions. One person did not get an entry level sales job with a media company because his profile said that he aspired to become an actor. I thought, aren’t the skills in acting and in sales related? This just sounds plain dumb on the employer’s part. Of course, the employer wants someone who will remain loyalty to their values and stay and build a career perhaps – but in today’s uncertain economy that’s a two-way street. The candor of material self-published on the web certainly does call into patterns the social patterns that businesses used to depend on to make personal sales, and that ought to provide a necessary lesson for business. The book even reports advice that people in some jobs should not have social networking pages or personal websites at all outside of what would come with the job (the businesses mentioned here included “investment banks, capital funds, and consultant firms.”) I have even written that there are serious ethical issues for employees who are paid to speak publicly for someone else’s interests (that would include trial lawyers), or who get paid to make discretionary or underwriting decisions about other stakeholders.

There are a couple of morals to all this. One is that Human Resources departments, like school districts, need to come up with clearer and more detailed guidelines concerning off campus web speech – since it becomes so very public, especially when search engines can find it. They also need to come clean about what their procedures for “background investigations” will be and how they even know they have identified the applicant or employee properly on the Web. The other is especially relevant to high school and college students. Emerging adults need to think hard about the careers they really want to “compete” in and behave appropriately throughout their school years. That includes not only activities and visible speech, but also preparing themselves properly for careers that reflect their personal values and that don’t lead to “conflict of interest.”
Posted by Bill Boushka at 12:33 PM