Aaron Greenspan: Authoritas: One Student's Harvard Admissions and the Founding of the Facebook Era (review) 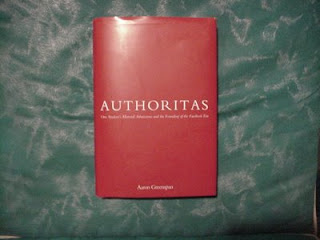 Aaaron Greenspan (“Welcome to Aaron’s Room”) is another young entrepreneur who founded a company called Think Computer at age 15, while growing up in Shaker Heights, Ohio, a suburb of Cleveland. I give the link for the site with its White Papers, which present a number essays about computer ethics and security (I like “Enron for Kids”), comparable to what I try to present on my own blogs and sites. His book mentions some trademark controversy. There is a “Think Computer Foundation” which helps children through technology and appears to be his. There is a domain named “Think Computers” which is called “Think Networks” There is another company in Pittsburgh called “Think Computers” founded by high school and college students that appears to be unrelated but is also slick and nifty. I don’t know if the trademark controversy deals with one of these other two groups.

But, on to Aaron’s story. His title page tells some of it: He takes the Harvard motto “Veritas” and gradually derives the spelling of the first word of the title of his book. (I mention one annoyance: he spells “all right” as the informal “alright”, like in many foreign movie subtitles; don’t know if that’s intentional). By now, many readers have seen the June 16, 2008 Rolling Stone article by Claire Hoffman, "The Battle for Facebook" (link). in which the story of how Mark Zuckerberg developed and built today’s commercial social networking site Facebook and apparently used much of the infrastructure that Greenspan had developed for a Harvard application. There now is litigation over this situation, and it’s not possible to comment in detail here on the merits of the case.

Aaron is like me as a writer in that he loves to load up autobiographical narratives with minute details, and he includes a lot of memos, including blow-by-blow of his battle with Harvard over the application that he developed. He got into a catch-22 over Harvard’s demand that he not only remove a password logon but that he turn over a list of user-ids when he had promised his clients anonymity. His application was supposed to enable class signup mechanics and provide for evaluation of professors, so confidentiality was essential. He provides some discussion of the hashing of passwords and the philosophical impasse with the Harvard Deans over their unwillingness to recognize the validity of hash tables. In some ways, he was in a situation that in some ethical dimensions resembles some of mine, involving possible conflicts of interest (over use of Harvard facilities) and on the “meaning” of what he was doing.

In fact, he notes that once Facebook became a public site, members behaved much more openly than did students using the application at Harvard, as these students were originally quite careful with personal information. He indicates that teens and college students in general resent the idea that parents and employers can see the information: social networking customers want to have it both ways, becoming celebrities while still believing that this is their “private life.” This gets toward the “online reputation” issue that we have discussed already in several other book reviews. This is a good place for me to insert another point about “personal information”: sometimes an argument that someone makes on a blog or social networking site is all the more valuable when the speaker is willing to let others know about sensitive but relevant aspects of his or her own personal background – and that itself gets double-edged.

The earlier chapters of the book give likewise detailed accounts of his grade, middle and high school life. He seems to have demonstrated unbelievable energy. In 6th grade, he was benchmarking speeds of computers that the school district would buy. He actually got into trouble copying diskettes slightly before the Internet age – when software copyright licenses were still a mystery. In high school he started his web and computer evaluation business Think Computer, and did work for entrepreneur Cameron Johnson, whose book is reviewed on this blog on April 9 2008. He shows some restrained candor in discussing both Johnson and Zuckerberg.

He talks about his family, including autistic brother, and his asthma attacks, which would lead to pneumothorax (collapse lung) a couple times in high school. On p 55 he offers a balanced statement about his family “karma” that may seem dismissive to an older person (like me) who has seen these issues play out in troubling ways. He talks about AP courses in high school with dispatch.

I’ll watch his white papers and see if he covers some more of the touchy concerns today, like “reputation defense”, copyright fair use, and the like.

It is apparent, especially since Aaron's contribution was an in-campus application, that Aaron never conceived of "social networking" as a replacement for real world interactions. I don't think that even Zuckerberg realized that, in a world with tens of millions of users, many people would use it that way, creating a new set of social issues.

I note that the cover of his book is red, probably because of the "Crimson" paper -- but Ohio is a "red" state. I remember the visits there for summers in the 50s: trips to Cleveland were a big event (as were Indians's games in the old Municipal Stadium), and the communities I knew were Kipton, Oberlin, Elyria, Rocky River, and Lakewood.

LexisNexis News posted an article by Scott Duke Harris and Chris O'Brien from the San Jose Mercury News (Sunday June 29, 2008) about the litigation going on between Greenspan and Zuckerberg, some of it questioning the registration of the Facebook trademark itself with USPTO (Serial 78920322, but there are others that come up with a TARR search). The article title is "Court battle over Facebook shifts to San Jose: Former Harvard classmates accuse Zuckerberg of stealing ideas". Is this a case of reverse engineering? The current URL that works now is here.

Venture Beat also has a story by Matt Marshall about Greenspan's account, "Who founded Facebook? Aaron Greenspan says he came up with the idea first," link here.

As far as I know, Aaron is of no relation to former Federal Reserve Chairman Alan Greenspan, whose “Age of Turbulence” I review on Oct 19, 2007 on this blog.

July 6: I looked further into the trademakr issue made a coordinate post about the trademark concern here.
Posted by Bill Boushka at 7:03 PM