John Perkins: Confessions of an EHN 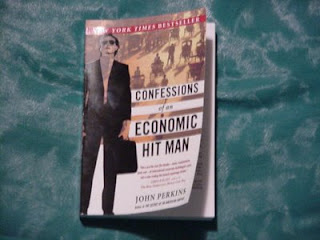 The passage of this book that hit me the hardest occurs in Chapter 29, “I Take a Bribe.” What did they call that in Sunday school ethics class, “bribery bridge?” Here, in 1987, at age 42, (having “retired” a couple times) Perkins is summoned to a private lunch by an executive from Stone & Webster Engineering Corporation (SWEC) and offered a lucrative contract with no work, and then asked “do you intend to write any more books?” Then (p 201) “books … dealing with stress and such things are perfectly acceptable… You will not mention political subjects ….”

That calls to mind what has happened to me in the past few years. I’ve gotten calls and invitations for jobs for which I could not be suitable. Particularly to become a “role model” for disadvantaged youth, when I never married and had children, and make a lot of that. If I would serve someone else’s agenda, a lot of people could feel better. I bothers me to get unsolicited calls like this. Oh, yes, I’ve have to take down all the blogs and books.

In fact, Perkins found in 2003 that major publishers were afraid to publish this book as non-fiction when he approached them. Some encouraged him to make it a novel. But I’ve covered already in my blogs that even “fiction” can get people into trouble (that happened to me with an Internet screenplay when I was substitute teaching) when people believe that the characters are identifiable.

No Perkins wrote this tale in 2003-2004 as a confessional, and at the end he admits that some people may resent his making hay out of public acknowledgement of living a life that exploits the “weak” around the world. That itself was a common Leftist moralistic tome that I heard in the early 70s. Since then, of course, we have gotten $140 a barrel oil and the subprime crisis, of course. He is right on target bringing out another set of inconvenient truths, with a life story that was launched, he says, by some coincidences in his youth as a somewhat privileged only child born in 1945, two years after me.

In early adulthood, he would be inveigled into interviewing the NSA (polygraphs included) as a way to avoid winding up in Vietnam. I guess this could have happened to me; my blogs and books reveal a narrative of comparable irony to his. He wound up as an economist for a pseudo-private “partnership” called MAIN, developing analyses to justify American “imperialist” involvement in the developing world, with would include the Middle East, as well as Ecuador (and other South American “dictatorships”), Indonesia, Panama (and the Canal), and Venezuela. In his thirties, he would have his first conscience crisis, then form an alternative energy company Independent Power Systems (IPS), then drop that, “consult” for SWEC and gradually free himself for more truthful writing and humanitarian projects. On 9/11/2001, he was leading a group meeting an indigenous Amazon tribe.

An EHM (or his relative, the “jackal”) is paid to spin other people’s theories, rationalizing “corporatocracy” or the “corporate state” and the exploitation of natural resources in poorer countries, in a manner that causes the natives to incur enormous debts in dollars. The debts are paid by a new kind of slavery, getting menial work done for pittance wages (the Wal-Mart problem), and by getting the country to “corporatize” and “privatize” its culture, leading to Dubai at best, perhaps, but to the despair among young men that led to 9/11 at worst. Some of the EHM activity relates specifically to manipulating oil interests, and guaranteeing that it is priced in dollars (not a good thing, as foreign countries, like the euro, are much stronger and as American debts could be called in). Lindsey Williams, in mentioning Perkins’s book, develops that particular theory in his video “The Energy Non Crisis” reviewed on my movies blog (July 20, 2008 here . Perkins describes skullduggery that requires a certain aggressive heterosexual conventionality: one of his duties was to arrange a secret mistress for a Saudi prince. Indirectly, at least, that part of his native comports with the homophobia of past generations (especially the circular blackmail issue), although he never quite says that.

Of course, if you are paid to publish what other people tell you to say, you have not personal intellectual or expressive freedom (no wonder, then, that corporations have suddenly discovered the “dangers” of blogs and social networking profiles, even if most of Perkins’s story occurred in pre-Internet days.)

Toward the end, Perkins talks candidly about our personal moral stake in how our capitalist world based on “economic growth” works. Even though much of the book seems to suggest a “black ops” cabal or plot (involving the CIA, NSA, and legions of major corporations) – a concept that I call “The Academy” in a couple of my screenplays and in my experimental novel) he insists that this is all nothing more than a “system” that we all depend on. That makes us all individually “guilty” and potential targets of hatred from “radicals” overseas who, dispossessed, can easily rationalize taking by violence from us as individuals what they think should be theirs. That was a favorite philosophy of the far Left (an extreme case was Mao’s “Cultural Revolution”), but some of the specifics (like radical Islam) involve religious and moral issues that go beyond the usual Sunday School reservations about materialism and “sacrifice.” We grow up in a culture that we believe to be reasonably stable from day-to-day, and we develop our personal moral beliefs on the foundation that the rule of law (and that no one is above the law) can be depended on. Yet, we wonder if we face major change if our whole “system” (predicated on “economic growth”) is not morally sustainable. We see this debate with energy supplies and global warming, and some groups, like those who produced the “Escape from Suburbia” films).

In the end Perkins must convince us that he will walk his own walk, in the Amazon, or anywhere.
Posted by Bill Boushka at 5:20 PM