"Digital Natives" grew up as "dwellers on two planets" 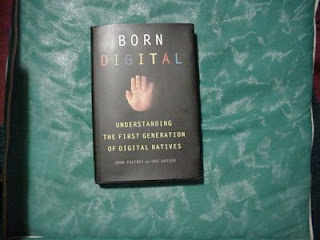 In an episode in the second season of TheWB’s "Everwood", old jazz artist Will Cleveland (James Earl Jones) needs to collect a damage debt from piano teen prodigy Ephram Brown (Gregory Smith) and asks the 16-year-old, “you grew up doing computers, didn’t you?” Ephram did, and his father soon sets up a digital studio for his practicing Beethoven, Chopin and Prokofiev.

So it is, that kids born since about 1985 or so have grown up in a culture used to computers, and by the late 90s, by and large, were starting to experience a lot of their lives online. Digital connections seemed as fundamental utility for getting on in life as the telephone (and I can remember party lines in the Midwest). It wasn’t just for self-promotion; it was for social networking, for employment, school work, politics, any communication, everything. So the authors call “The Kids” “Digital Natives” and people of older generations “immigrants”. I am a bit of a hybrid, as I started an information technology on mainframes (starting with defense) in the 1960s, when people ran accounting ledgers on EAM equipment. And, in the early years of my career, “desk checking” work before keypunching was the norm. My, how times would change.

The thirteen chapters each have one-word titles that summarize the major, unsettling areas of controversy in our wired world. For openers, the authors separate the problems of “Identity”, “Dossiers” and “Privacy” and later “Safety” but they are obviously interrelated.

Writing in a style that reminds one a bit of George Gilder, the authors start with the example of a fictitious young woman, and imagine how technology could mediate her concept and function of her “identity.” In rural or feudal societies, her “identity” would be limited by circumstances and family. During the industrial age, she might move to a distant city, and perhaps work a long time before (likely) marrying (especially starting with World War II) and she might establish what she perceives as multiple “identities.” In fact, the tendency of more technology societies to keep records, even if mostly on paper at first, would tend to cause her “identities” to consolidate and become knowable to others. Still, she might develop an enhanced sense of a “private life,” and after marriage family life would largely be viewed as private. Along comes the Internet (as it evolves from user groups and dialup to self-publishing and blogs, and finally Web 2.0, peer-to-peer and, most of all, social networking) and she finds she can, at first, invent multiple identities (associated sometimes with “avatars” in cyberspace environments). But in time, the “two way street” takes effect. The record of her activities accumulates, often available to search engines, and she develops an “online reputation” (so much a concern to entrepreneurs like Michael Fertik with his “reputation defender”). That reputation is affected by the postings of others and even by the identification of others as “friends” – the company she keeps. In time, her life must integrate; her career and personal life will have to comport with her online identity and reputation.

Somewhat similar processes are at work with issues like dossiers (generally under control of governments and especially of data collection companies, especially credit reporting companies, that existed well before the Internet), and privacy (which is challenged by the tracking of her behavior by marketing companies and sometimes by insurers), leading to potentially profound ethical questions. Safety has received a lot of attention in the media, with respect to Internet sexual “predators” and also some recent tragedies (as with the Myspace case in Missouri), as well as, of course, consumer identity protection. Furthermore, protection of children comes up in connection with “adult content”, which the First Amendment vigorously protects. The authors discuss the CDA and COPA briefly. They also discuss Section 230 of the CDA, which still stands and which protects Internet hosts from vicarious liability from content posted by subscribers, generally, but they believe that ISP’s should share more legal burden (it’s not clear how from what they write).

They give a thoughtful discussion of the whole piracy problem, without going into the technical details of the DMCA or its controversial safe harbor provision. They explain that younger people, and in fact the public as a whole, has inadequate understanding of copyright, and believe that the recording and motion picture industry has been rather brutal with sudden lawsuits against consumers, who sometimes have been wrongfully identified, and must defend themselves at their own expense. (The potential “chilling effect” of having to fend off wrongful litigation or even computer seizure or prosecution for other situations ought to get more space here.) They do explain the logic behind taking town of the original Napster, and of the MGM-Grokster case, where downstream liability does exist if a business model is predicated on infringement.

On quality of information when self-published (the "cult of the amateur" issue, discussed here in June 2007), as well as the safety of sites and services, the authors support the trend toward user ratings and companies that publish user experience. In the Web safety issue, a good example is "Web of Trust."

The authors are always “walking the line,” calling for great wisdom on the part of the “digital natives” and effort by parents and teachers to impart this “wisdom” since many of the risks are counter-intuitive and not obvious to younger people, especially teens.

It’s the entrepreneurial or “innovation” paradigms, and (in my own case) political activism that the real issues of the Internet become razor sharp. “Youngsters” like Mark Zuckerberg (deploying from a dorm room no less), Aaron Greenspan, Cameron Johnson, and Shawn Fanning simply climbed onto their computers and networks, invented services or businesses, and deployed them. It wasn’t necessary to ask for anyone’s permission or advance in a hierarchy first. It wasn’t “necessary” to have a wife and children first (most of them were younger than typical age for that anyway). In some cases, “creative destruction” occurred; other jobs could be destroyed, whole industries restructured. In some cases there were real legal questions. Napster, in its first form, at least, lost its legal battle, in fact. But almost in no case did any of the young entrepreneurs imagine the long term consequences that could occur, even if those consequences were necessary for society to swallow in the long run. (It sounds like “The Chicago School” doesn’t it!) Zuckerberg could hardly have imagined “reputation defender”.

My own case is different in that it was no a technical deployment as simply a publishing one (starting in 1997). The idea was not to let organizations and special interests keep “bureaucratizing” the debate and shielding people from “personal responsibility,” but simply that one person, or at least one small business, could put everything down in one place. Since I “deployed” Wikipedia (Jimmy Wales) has come along, with a somewhat different (less politicized) emphasis. I realize there is a certain arrogance on my part in this, but there is a certain arrogance in deploying anything “revolutionary” without the “permission” of others, following the spirit of objectivism, perhaps one of Ayn Rand’s characters.

I recall back in the 50s looking forward to idea of space travel, and I recall seeing "2001: A Space Odyssey" in 1968, right after finishing Army Basic. In the 70s I would come closer to the mark when reading about mysticism, "Phylos the Tibetan: Dweller on Two Planets." Somewhere around age 50 or so, I made the migration, perhaps like the character Wall-e; digital cyberspace became something like a separate dominion, almost like another planet. But the "reconciliation" with mother Earth is certainly unsettling.
Posted by Bill Boushka at 6:33 PM