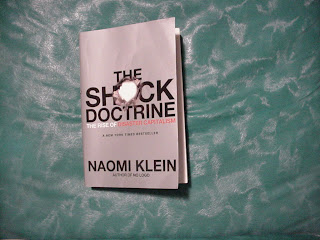 Klein’s book was recently featured on Amazon, and it is logical for someone who has read John Perkin’s “Confessions of an Economic Hit Man” (review in July 2008) to follow up with this book.. You might say that Perkins was just one of many, as Klein offers an almost encyclopediac survey of the manipulation of economies around the world under free market “ideology.”

But Klein has a particular focus. That is, catastrophe, whether the result of political instability or nature, offers an opportunity for the “rich” to come in to a country, buy up its industry, and apply “shock therapy” to the people and then essentially create a new society, with a veneer of moralism on top.

The earlier part of the book creates a metaphor between rendition or shock treatment in intelligence circles, such as some of the “Manchurian” experiments in the CIA (she discusses a particular experiment in Montreal but there were others in the 50s), and the “shock treatment” for a society, with the ideology developed at the University of Chicago by the Milton Friedman crew.

She then proceeds with the details of many coups and transformations, such as in Chile (which had its own 9/11) and Argentina, South Africa, Russia after the 1991 collapse of the Soviet Union, the eastern European countries (like Poland), the Asian financial crisis of 1998 (subject of a famous October 1998 Esquire article which I would have to hunt down later), then 9/11 in the United States, followed by Katrina, as well as the 2004 Indian Ocean tsunami.

One concluding point is the most important. An ideology of endless “economic growth” tends to create the non-sustainability of instability that leads to catastrophes, and the opportunities for the “disaster capitalists.” She does pooh the notion that some kind of right-wing cabal deliberately causes the incidents like 9/11, although one might say that about the South American coups, it seems.

She also believes that local collectives, in a socialist model, can manage national resources, like oil in Venezuela, without slipping into the authoritarian Communist model. I would question that, although she seems to point to Scandanavian democracy as provide role models to be followed.

In fact, after 9/11, neo-conservative writings were critical of most Islamic countries (at least in the Arab and central Asian world) for not having tried “democratic capitalism”. There was an interesting tone in some of these writings. Germany, France, Spain, Canada, Britain, and (even) Scandanavia are democracies, more socialistic than ours, and tolerant or even celebrative of diversity. Great artistic and cultural talent comes from all these places and mixes well into the extreme capitalism of US culture. It’s OK if it doesn’t follow out own religious ideas. But then, in implementing actual policy, the neo-conservatives turn the spin around. They set up crony capitalism, creating whole industries, with stock often owned by public officials with considerable conflict of interest (as with Cheney and Halliburton). They say they are “creating”, not just building nations and sometimes display disparaging attitudes toward the peoples (like Arabs) they say they are trying to reinvent. They throw the “little people” overboard, and invent a “moral” ideology saying that somehow these people didn’t “make it”, or would have made it had they practiced “Christian” family values, etc. The whole process reminds me of what happened in DC after the 1968 riots. Eventually the affected area was redeveloped and gentrified with expensive real estate, while the poor people were kicked out, sending the crime especially to neighboring Prince Georges County MD. Particularly galling was what happened in Iraq, where many jobs were given to “immigrants” rather than to natives, who had all the more reason to continue sectarian violence.

Klein has an interesting account of the Bush administration’s (especially Rumsfeld’s) behavior just before 9/11, when it wanted to “privatize” DOD, and after, when it first took control with sweeping powers (the USA Patriot Act) but then used these powers to create a whole new kind of “Beltway Bandit” group of security industries, often headed by ex “public servants” who were better at “getting business” by schmoozing existing public officials than they were at the actual technical expertise. In a similar fashion, Israel has used its state of military readiness (in its “eminent domain” activity in the West Bank and Gaza) to develop a whole security business that it can export. At the same time, the "ultra capitalists" can take advantage of the generosity of volunteers. After Katrina, some conservatives suggested repealing Davis-Bacon and the minimum wage, and setting up "enterprise" zones that obviously depended on faith-based organizations and teenager carwashes for money.
Posted by Bill Boushka at 5:19 PM