New Politics: Issue on the Gay Movement and the Left 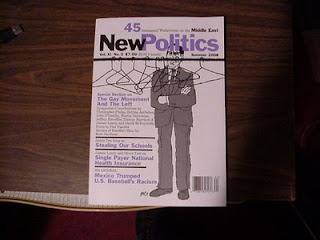 I saw this book-like periodical “New Politics” (for Summer 2008) at a B. Dalton’s and picked it up impulsively, attracted by its “Special Section on the Gay Movement and the Left,” with nine contributions reaching to p. 59. That’s over a third of the entire issue that reaches p. 163. Only later did I notice the political affiliation of the mag, “a journal of socialist thought.” The website is here.

I “confess” that I dabbled around with the Left in the early 70s, until I came out and then for a while thereafter. At NBC, there was another programmer, a young man, who was really into the ideology, and who, with a wife, helped run a city food coop. That sort of anticipate the “sustainability” movement talked about today. But earlier, back around 1972, I had experimented with Doctor Spock’s “People’s Party of New Jersey” until I found out how radical they really were. What I personally found is that, in person, leftists seemed to be a bit dismissive of gays, but wanted to include them as another oppressed “group.” Individual rights were seen relative to the group, in an manner analogous to the way conservative Christians often see individual rights as circumscribed by the needs of the nuclear family.

I can jump forward twenty years to my libertarian era, where gay rights were justified by hyperindividualism (very much along the lines of GLIL and the Cato Institute), by absolute accountability of the individual for himself, along with harmlessness to others. It’s easy to see how this view could help overturn sodomy laws. Since then, we’ve seen a backslide, as pressures (and both short term and long term “threats”) from the outside world force people to consider their “responsibilities” more collectively, it seems. Libertarianism would offer a good way to diagram the whole problem: the Nolan Chart, which offered perpendicular axes of degrees of personal freedom and economic freedom (and respect for property rights), would yield four ideologieis: authoritarianism, conservatism, liberalism, and libertarianism. One problem is that authoritarianism can sometimes “take care” of people who can’t fend for themselves.

The contributors to the Gay bis left Symposium are Christopher Phelps, Bettina Aptheker, John D’Emillio, Martin Duberman, Jeffrey Escoffier, Thomas Harrison & Joanne Landy, and David McReynolds. The section then concludes with a poem by Pier Paolo Pasolini, and a discussion of Pasolini’s films by Kurt Jacobson. Curiously, I didn’t see a discussion of Oedipus Rex (1967), which I rented from Netflix recently. Pasolini lived his life in the third person, fascinated by moral dilemmas but not always ready to walk his own walk.

The gay-left contributions do tend to stress the abstractions of struggles between groups of people, and tend to posit the struggles of the 60s and 70s in broad ideological terms. D’Emilio (whose columns in Charles Ortleb’s New York Native during the 80s, in relation to the AIDS crisis I remember well) sums up some of this when he writes (p..30):

“I wanted a social structure in which other systems of oppression and inequality would become artifacts of the past. Because I didn’t think that the latter (no racism, no sexism, no homophobia) would ever happen under capitalism, a democratic socialist version of the future became mine. And as I read more history, especially about American radicalism, I was taken by the way the way that fighting for the underdog, fighting for those who were persecuted and mistreated, seemed to be what motivated people who called themselves leftists.”

Jeffrey Escoffier analyzes the rather negative-seeming, oedipal theories of Sigmund Freud’s Left, and compares this to the theories of Marxist Herbert Marcuse, whose Eros and Civilization (1955) was often mentioned in the early 70s, even in the workplace.

The Far Left, however (like the Far Right) can be, oh, just so moralistic when mapping its ideology onto demands made on individuals. I certainly discovered that myself in the 70s, with this obsession with doing away with inherited wealth (it isn’t “earned” or “deserved”), and how professionals in the middle class (like me) could rapidly be seen as “enemies of the people.” They think nothing of expropriating what someone has “underservedly” and giving it to someone else, playing Robin Hood. The extreme endpoint in the 60s was the “purification” of Mao’s “cultural revolution.” In a global world (as well a religious one) that can lead to some agonizing debates. We’re used to telling teens not to have children until you’re ready with a career and ready for marriage. But the flip side of this can be that avoiding having children (for career) is morally wrong because if avoids sharing the risks that others take, and that one depends on. That’s the kind of thinking (in various restatements) that drives Vatican teachings. And generally, the Catholic Church has been connected to the Left (Justice Scalia and Pat Buchanan notwithstanding).

If one wants a world where there is a place for everyone and not just the strongest or most competitive, then, we all do have to think about how burdens are shared. You can call this a “pay your dues” philosophy perhaps. Or you might find some justification in older notions of “public morality,” even in socialistic or communistic societies.

The book-magazine follows on to the gay-left debate with some pointed articles and book reviews that relate back logically. Lois Weiner and Mary Compton have an essay “Neoliberalism, Teachers, and Teaching: Understanding the Assault”. This piece maintains that “No Child Left Behind” (NCLB) is a ruse for doing away with a lot of public education, eventually. Give ‘em a test at age 16, and if they don’t pass, no more public school.

The try Joanne Landy and Oliver Fein on “Single Payer National Health Insurance.” They do try to provide evidence that most Americans, although not the most privileged, will be better off under a single payer system like Canada’s. They admit there are waiting lists for elective procedures and some priorities must be set, politically.

Betty Reid Mandell has a “book review” of “Social Politics: International Studies in Gender, State and Society,” Fall 2007, with particular emphasis on post-Communist states in Eastern Europe, particularly Poland, which has some issues with anti-gay rhetoric precisely because it has to be pro-natal and pro-maternal to build itself back up.
Posted by Bill Boushka at 4:37 PM