Nancy D. Polikoff: "Beyond (Straight and Gay) Marriage": a pragmatic argument for fairness 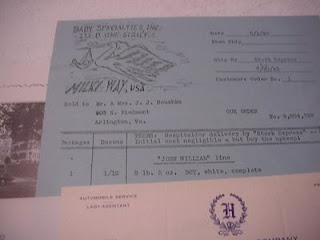 American University law professor Nancy D. Polikoff has written a fairly brief but compelling argument for modifying family law so that it recognizes dependency fairly, whether in or outside of legally recognized marriage.

The “obvious” customers for her concerns sounds like LGBT people, but, not necessarily, she argues. Children of single parents or of non-legally married parents need to be treated equally in all areas of law, as do other dependents, especially, given today’s demographics, elderly parents. Yet laws often get in the way, particularly some recent state laws and constitutional amendments (like Marshall-Newman in Virginia) that would prohibit arrangements for non-married couples that “simulate” marriage (civil union benefits).

She does trace the history of the “cultural wars” relative to the gay rights movement, with respect to marriage, through the civil union and gay marriage debates that developed in the 1990s (first with Hawaii and Vermont) and then led to today’s situation, as with Massachusetts and California (where there is a referendum the November 2008 election).

She does remind us that marriage used to be regarded as society’s tool to regulate sexual expression, both in and outside of marriage. She moves on to a synoptic discussion of the political opportunism on the part of the religious right, trying to blame homosexuals and the unmarried for the problems today. She doesn’t connect quite all the dots of conservative arguments here, but it’s clear that the cultural attachment to marriage has a lot to do with emotional fidelity and emotion. “Special rights” for married people (and a belief that they have a right to monopolize sexuality) certainly hurt those adults who don’t have heterosexual intercourse with openness to their own procreation.

She understands the importance of gay marriage as an “equality concept” given that society favors marriage, but it is the fact that marriage is so privileged that is the source of unfairness, particularly to dependents in “non-conventional” families. By keeping marriage as a largely private and religious matter, upon which relatively little depends, one sidesteps all the potential arguments about extending marriage (as with polygamy).

The most remarkable passages in her book concern the idea of dependency (the “caretaker-dependent dyad”). On p 122 (in a chapter called “Valuing All Families”) she refers to Martha Albertson Fineman’s book “The Newtered Mother, the Sexual Family, and Other Twentieth Century Tragedies” (published by Rutledge in 1995) and the characterization of “inevitable” vs. “derivative” dependency. “Inevitable” dependents comprise children and often the elderly and disabled. “Derivative” dependents comprise those who care for the inevitable dependents. Although the most obvious example is parents, people often care for dependents whom they did not create (including elderly parents and sometimes siblings). “’We all lead subsidized lives’, she quotes Fineman as saying, adding that personal autonomy is a myth creating by hiding dependencies in the economy and public policy. Society should compensate derivative dependents, who often share caregiving duties inequitably, rather than leave them privatized in the family. One can debate this suggestion: after all, Medicare does pay for a lot of elderly Medicare, but not for nursing home care (generally).

Later, on p 151, she speculated “A gay man with no partner or children may be the one among his adult siblings best suited to move in with, support, and care for an aging parent and grandparent.” Notice: the gay man in this situation is expected to give up his own sovereignty to meet the needs of someone else when he did not do anything to cause the need (unlike the case of having children). Perhaps he has to change careers, or become involved in groupthink-style political causes (to benefit the dependent) that he personally would not have supported. Such a scenario has profound moral implications, but it happens all the time. The naughty word for this is “family slave” but in the past, unmarried adults (especially women) were expected to do just that: stay home and look after the parents. She doesn't mention that 28 states have filial responsibility laws, which may become legally significant to adult children as their parents live longer but may become dependent.

That gives a clue to what the religious right wants: to socialize as many people as possible to be able to function as married adults raising children and caring for others (including the elderly) in their own families. Marriage, they say, has to be emotionally rewarding enough (including, in a lot of cases, a lot of pampering) to keep couples together so that they “voluntarily” provide all the intergenerational services that society needs. She mentions the old-fashioned “family wage”, upon which social policy (which discriminated against female workers) used to be based, but social conservatives like Allan C. Carlson, who in a 1988 book “Family Questions: Reflections on the American Social Crisis” (Transaction Books) wrote that the family wage would be necessary to counter the “logical consequences of radical individualism” (p 111). It isn’t hard to imagine that the family wage supports a patriarchal family, emotionally important to many men to remain faithful.

She also discusses the evolution of our health care system as something that came out of wage and price controls during WWII, analyzes the 1993 Family and Medical Leave Act as being more rational in whom it covers than marriage law, and supports some paid leave, such as the proposed Health Families Act of 2007 (S 1085, govtrack reference here.

Polikoff does go into detail about the way different states handle issues like wills (including challenges from blood relative -- it's interesting how blood relationships are supposedly to get for people what they can't take care of themselves even as adults), dying intestate, hospital visitation, workman's compensation, and particularly social security, where she notes that the social security system has all people supporting the spousal benefits of high income one-earner families.

A good book for comparison might be Elinor Burkett’s “The Baby Boon: How Family-Friendly America Cheats the Childless” back in 2000 (Free Press). Burkett admits that some people view the childless or single as “cheating the system.” 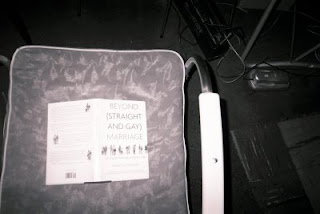