Tory Johnson and Robyn Spizman: "Will Work from Home" 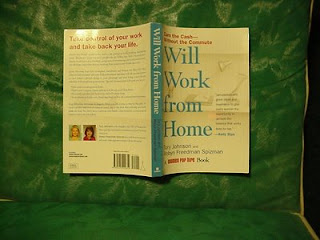 Tory Johnson is the workplace reporter on ABC News, particularly on “Good Morning America” and emphasizes issues for women in the workplace. She has ventured into areas of general prudence, such as “Dusting Your Digital Dirt: Your Online Webpages Could Cost You a Chance at a Job” March 16, 2006, link here.

This is a fairly straightforward, “how to” book, practical, aiming at the general proposition that a lot of people need to make some money without commuting in these days of higher gas prices and green living. The early part of the book has some quizzes and assessments to help the reader decide if “homework” is for him or her. The book has many sidebar testimonials, printed at the bottoms of pages.

There are several basic scenarios that could make this book of interest. The most basic situation may be that a worker or salaried professional wants to cut down commuting and wants to work from home certain days of the week. This could work particularly well for software developers. Another likely adjustment is fewer but longer workdays.

A common situation is that a stay-at-home parent needs extra income. This may happen in some not so voluntary situations, like eldercare. Even so, working from home often requires considerable investment in space and organized time, in which children or dependents may not interrupt. It doesn’t always eliminate the need for hired help with care.

A more challenging and perhaps positive scenario occurs when someone knows what he or she wants to do, and might need income from a second source. Tory Johnson does discuss authoring a book (including e-books or Kindle) and freelance writing, and logically that would include screenwriting. In practice, the business considerations for trade publishing when compared to cooperative or “supported self-publishing” (like iUniverse or Author House) are quite different (she doesn’t go into detail here). Later she talks about how to earn income from websites. She does distinguish between different kinds of web businesses somewhat: political blogging requires a very different kind of web presence and presentation when compared to information about one topic, or a site that processes e-commerce on a narrow kind of service or product.

I wondered, what about two work-from-home jobs, if one does not pay enough (like the freelance writing – and (to add on to her discussion) the National Writers Union has made a lot of royalties from Internet republication so that “professional” freelance writing can be viable economically).

That question calls up a lot of matters I have checked. Some of the higher-end homework careers, from customer service agent companies (like Alpine, LiveOps, etc.) do require quite a bit of commitment. Alpine, in fact, apparently offers benefits and real advancement. But the agent needs to invest carefully in his home office setup, with considerable attention to computer stability and freedom from viruses. One needs a stable cable or broadband line, a second phone line, fax machine, headset, and other hardware. Generally one needs to buy a desktop computer to be used only for business (for reasons of consumer security), meeting strict software, browser, connection, and security and firewall requirements, which are likely to grow with technology. Perhaps later these jobs will allow more secure wireless connections, but they don’t yet. In some cases one may need to have made this business investment even before securing the job.

She talks about myriads of opportunities, for varied temperaments. One interesting idea that varies on substitute teaching would be online tutor. Many of them are leisure, lifestyle, senior, or childcare related. She usually gives websites with lists of companies in a particular area. Some of them are well known, like real estate agent. I can think of some other examples, such as literary agent or even film studio production agent (for vetting screenplays).

She talks about direct sales, and Amway-type companies. The median income from these kinds of representative opportunities is low, but I heard a pitch for something like this as early as 1970. A few people are spectacularly successful at this (often women).

She warns against the spammy “work from home” emails (and street postings) requiring purchasing of starter kits first.

She mentions the legal arrangements (proprietorships, LLC’s, S-corps, etc.) She talks about zoning (and license) requirements that vary enormously by community. She talks about cookie-baking as a business, but in Charlotte, according to John Stossel, a woman was put out of business because she didn’t have a “commercial kitchen.” Another woman who wanted to braid African-American “nappy” hair was put of business because she laced a cosmetology license (in Kansas). You would think freelance writers and computer programming would always be OK because it doesn’t require physical traffic in the neighborhood. But in New Jersey (and a few other communities) freelance writers were harassed or fined (including one rabbi for writing his sermons at home). Some of these made John Stossel’s “Give Me a Break” story on ABC 20-20 a few years ago. Some of these incidents seem to be related to the political power of established unions or companies interested in protecting their “turf” rather than legitimate zoning or licensure concerns. Some apartment buildings, condominiums or co-ops may have specific rules against home-based businesses, although it’s hard to imagine blogging being a problem today, especially since it is so tied to social networking sites. But, on second thought, personal web activity attracts attention, and that itself in the modern world can setup new kinds of problems.

I look back about fifteen years to when I took home dumb terminals from work for Nightcall (on a mainframe, with the nightly processing cycle in batch), and hooked them up on the living room floor, and struggled when the phone rang with an abend. We went from that to Procomm on a PC, and using pagers. A lot has changed, very quickly.

One other opportunity, intermediate to working from home, could be renting office space in a “telecommuting center” close to home.