David Smick: "The World Is Curved", not Flat 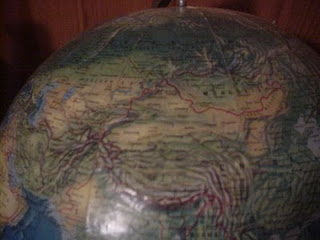 We know from the title of the book that it sounds like the antithesis or answer to Thomas Friedman’s “The World Is Flat” and “Hot, Flat and Crowded” (this blog, Sept. 15, 2008). The white cover has a tempting tagline “The mortgage crisis was only the beginning.”

The author, according to the dust jacket, keeps a “lower profile” than many other financial world personalities (like Jim Cramer) but he published “International Economy” and is a partner and chairman of Johnson Smick International (his bio for that company is here). The book contains many accounts of dinners and meetings in cities all over the world, as if he were an observer of all of the world's financial dealings but was just barely off the radar screen of the media himself.

In fact, it seems, from the course of the book, that the mortgage crisis (as it started to unfold in 2007) is near the end of the process. That’s because Smick gives us detailed discussion of another of financial shocks in the past: the whole collectivist 1970s, the 1982 recession, the decade long deflation of Japan’s economy, the 1997 Asian financial crisis, the 1992 crisis in the British pound and the whole set of controversies the preceded the birth of the euro, the accounting crises in companies like Enron and WorldCom (about the time of 9/11) that led to Sarbanes-Oxley, and finally the current crisis.

Amazon says that this book was published on Sept. 4, 2008. The narrative does summarize the Bear Stearns collapse on St. Patrick’s Day this year, but what’s amazing is that the book was on the streets even before the government “nationalized” (if that’s an apt verb) Fannie and Freddie, almost two weeks before the Lehman Brothers and AIG collapse, based on the credit default swaps market being shorted and then called in. Yet the book seamlessly explains how it was about to happen. He explains the motive (based on Japan's 1990 collapse) for the Fed to lower interest rates after 9/11, and how that policy could lead to a housing bubble, and then other bubbles. He traces the process of securitization of loans, of the concept of "riskless risk" that could only implode, and the disconnect between lenders and borrowers inherent in the new financial instruments. Anyone who read this book right after it came out probably could have just waited for the next collapse at any time. In fact, Smick explains that the credit markets were contracting seriously in 2007, and in August 2007 the “financial 9/11” that finally unraveled on Sept. 15 really almost happened thirteen months earlier.

Of course, the “flat world” concept (not exactly “flatland” of science fiction) refers to globalization, and Smick promotes the idea that globalization (if not always equivalent to greed) is good. In fact, the “Reagan-Clinton” revolution that took us out of the 70s gas lines was a studied approach to free trade. At the same time, we gradually rewarded entrepreneurialship and even asymmetry (most of all with the Internet). Along these lines, Smick discusses China’s resistance to full political freedom – particularly online – as potentially keeping it stuck in some sort of Confucian (and post-Communist) social and political value system that could still undo all of China’s economic gains some day. Smick also discusses “class warfare,” as favored by politicians, especially on the Left (Smick says he started out as a Democrat but, well …) . The rich really don’t carry the economies of the world, and it’s important to reward initiative and hard work for the individual person in the middle. He sees class struggles and perhaps the way “family values” are debated as a retreat from a faith in personal initiative.

But this gets us back to why the world (like the planet itself) is curved, into a kind of non-Euclidean geometry. On p. 214 he writes “Today the world is curved precisely because the political and financial market worlds don’t understand each other.”
Posted by Bill Boushka at 1:30 PM