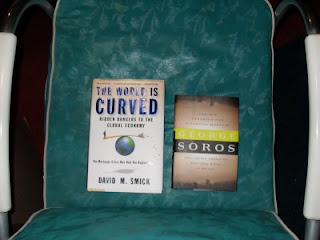 Hungarian born George Soros has been connected with Barack Obama’s campaign. He has for years argued for a pragmatic approach to world finance, including his idea of an “open society.” Earlier works had included “The Crisis of Global Capitalism” and “The Alchemy of Wealth.”

This short book is divided into two sections. Part One is “Perspective” and Part Two is “The Current Crisis and Beyond.”

The first part is a treatise in philosophy and epistemology. Soros talks about “knowledge” and “manipulation” (or “participation”) as psychological opposites. These are like yang in yin, or the polarities of Paul Rosenfels (in the April 2006 archive for this blog) and seem to relate to basic human personality. He also mentions “objectivity” and “subjectivity” with almost the same intent as Rosenfels. His purpose here is to show how human behaviors additively lead to the way markets behave. The connecting component is “reflexivity” which bears some relation Einstein’s “relativity” and to Heisenberg’s Uncertainty Principle. People make decisions based on moving targets. Truth is never absolute (he gets into the relationship between facts and truth) and knowledge is never certain, and manipulation (that is, the “masculine”) changes the way it looks to the observer. Hence, the concludes, economic markets can never reach equilibrium. They will always tend to stumble in various ways and need to be regulated in a reasonable fashion. He considers the “market fundamentalism” that started in the Reagan years and that was seemingly inspired by Ayn Rand as simply an incorrect characterization of how markets really work, and as unreliable as carrying “moral hazard” to the extremes that some libertarians view it in areas of “personal responsibility.”

For example, a writer like me may analyze my own life (manipulation) and say that this leads to certain articulable principles (knowledge). A politician will go in the other direction, and take these principles and turn them back to policy that affects other people’s activity. I think the notion is important because moral values themselves seem to have a pragmatic component. A great problem for society is how to get people to transcend immediate “self-interest” and provide for others, especially in situations that transcend choice or “personal responsibility” in the modern sense. Communism and fascism (both of which Soros has personal experience with, as he relates in his narrative) attempted to use inflexible ideology to rationalize the rules that would apply to people. (So does radical Islam.) Democracy (or “democratic capitalism”) must be more flexible. This means accepting some uncertainty or relativism (which Soros calls “reflexivity”).

The second half of the book restarts the ground he covers in his prologue, and gives a deep account of how the “bubble of bubbles” developed (building on the housing bubble) much as does the previously reviewed book by Smick (but more briefly). He wrote most of this after the mini-crash of August 2007, after which the stock market recovered and gave a false sense of security. He gives a detailed diary of his financial activities starting in January 2008, including the collapse of Bear Stearns. Curiously, he does not anticipate the sudden runup of commodities and oil in the summer of 2008, which would be the last part of the bubble.

He makes no bones about it: we need a Democratic president and Congress, and major regulatory reforms at all levels, including transparency of instruments, and various kinds of help for homeowners.
Posted by Bill Boushka at 9:07 PM