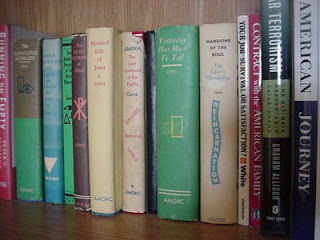 James Gleick has a perspective on book publishing in The New York Times, Sat. Nov. 29, 2008, “How to Publish Without Perishing,” link here. It appears on p 10 of the Sunday (Nov. 30) paper “Week in Review” section.

It is getting more difficult for traditional trade book publishers, just like newspapers, to make their earnings target in what has been regarded as a numbers driven business. Publishers may complain about competition from the Internet, but the whining is perhaps hard to justify. Publishers (or retailers like Amazon) now offer Kindle downloads, and a few years ago experimented with portable book readers and Softlock technology. Yet, nothing is so convenient as the acid-free paperback novel when on the beach (note the pun) or in a long line at a movie opening. Because some books become very popular during economic downturns, some publishers might actually find counter-cyclical opportunity.

Gleick talks about the decline of the printed encyclopedia (remember that in the 50s people did well selling encyclopedias door-to-door for a living - we bought the 1950 World Book, with its great color-coded topographic state maps unmatched since – that way) and dictionary, although if you look at the activity in any high school library that may sound unfounded. But the printed book, whether novel or non-fiction, remains a great utility.

The commentator also discusses the Google book search settlement, with all its legal complexities driven by the fact that different parties view copyright and “fair use” so differently. But Gleick points out that the Internet is doing a great deal to rescue books that have gone out of print and otherwise could not be seen at all.

One problem with trade non-fiction is that it tends to become obsolete so quickly. A celebrity, especially a politician, writes a book, but in two years all the issues have changed. How long will books on the current economic crisis sell?

Even fiction authors, if they deal with modern circumstances, can find their work becomes obsolete. In the 1980s I spent a lot of time on a long manuscript based on an eventual Communist invasion of the United States. But that became obsolete with the fall of Berlin and other satellite countries and then with the fall of the Soviet Union in 1991.
Some day soon I will look at my old manuscripts and try to recap what was in all of them.

As I’ve covered before, companies like iUniverse (which recently merged with AuthorHouse and relocated to Indiana) offer cooperative or “supported self-publishing” but have also worked with Author’s Guild to bring back out-of-print works. For example, I purchased novelist Allan W. Eckert’s “The HAB Theory” (about a terrestrial pole shift and resulting cataclysm, orig. 1976) and the same (diverse) novelist's “Crossbreed” (a Disney-like story about a resourceful wild bobcat/domestic feline animal and his reconciliation with man), originally from 1968. I don't know how well these businesses are doing in the current economic downturn. Maybe a visitor does know!

One can imagine an "ethical" debate: to gain credibility for what is published, should authorship, publication and distribution be accomplished by separate parties?

It looks like some B Dalton's book stores close Jan. 17, 2009, at least near me. The sign directs one to a Barnes and Noble at some other location. The "smaller" chain book store may not survive this economic climate. And we need to be concerned about the specialty neighborhood book stores, like Lambda Rising, as they must compete with larger chains, now in a difficult economy.
Posted by Bill Boushka at 7:34 AM

First of all. Thanks very much for your useful post.

I just came across your blog and wanted to drop you a note telling you how impressed I was with the information you have posted here.

Please let me introduce you some info related to this post and I hope that it is useful for community.

Mu st also say that there are a lot of businesses inspired and affected by internet. For e.g. data room virtual. What do you think?