Col. Jack Jacobs: "If Not Now, When?" A call for more equitable sacrifice, and universal military service 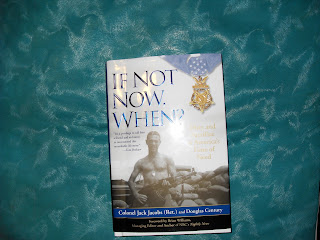 We could add another subtitle: "If not Me, then Who?"

This book starts with a Foreword (“The Man in Seat 2B”) by Brian Williams, Anchor and Managing Editor, NBC Nightly News. Williams interviewed Jacobs on Christmas Day, and placed the book in a moral context of duty and sacrifice. He says in the foreword that 120 million of us think our stories and ideas are worthy of being read (as we put them into blogs), but that Col. Jacobs’s story is set out by sacrifice and has really earned the privilege of being listened to.

The book is largely a detailed memoir, with a lot colorful metaphors and cute observations – almost as if he anticipates a Tim Burton biographical film. Jacobs, born into a relatively poor Jewish family, was able to attend Rutgers in New Jersey and enter the ROTC program. He would be commissioned as a 2nd Lieutenant and demand Infantry, and learn his place quickly. Because he was a “college grad”, he would be assigned as an advisor in Vietnam before the buildup, and would see combat in the Delta soon, and suffer a curious head wound (his sinus would have to be blown back up with a balloon), for which he would win a Congressional Medal of Honor. His small size made him a difficult target and combat and may have saved his life. Jacobs is now the vice chairman of the Medal of Honor Committee. He would serve another combat tour shortly before Nixon agreed to peace, and many other posts, such as teaching at West Point. He would retire and become a bond trader and financial engineer, working with derivatives in the 1990s. Ironically, in the book he is blissfully oblivious to the financial crisis that derivatives would produce.

(I recall a particular experience in my own Basic Training at Fort Jackson in 1968: we were at MOS orientation, when a grizzled sergeant said about my record, "Hey, you missed a college grad!" I never had to go to Vietnam, but I was a "bad detail man.")

Jacobs married early, and eventually divorced, and on p. 214 writes “Military service is particularly hard on marriages with weak foundations, and it is surprising that any survive the extended multiple deployments, long hours, and frequent relocations.” I could take this somewhere that he doesn’t. “Heterosexuality is incompatible with military service.” Uh huh.

Earlier, at the beginning, he ties marriage with hints of the major moral controversy of concern to him. He notes that during World War II, men got “points” awarded that could get them returned to the States. Being married and having children counted a lot.

Later, on p 126, Jacobs mentions the social divisions created by draft deferments in the 1960s. He notes that marriage and/or fatherhood and then being a college student could get you out of the draft. Actually, the marriage and fatherhood deferments had been eliminated by 1965 with Johnson and McNamara escalated in Vietnam. Student deferments would be eliminated by the lottery in 1969. He doesn’t specifically mention Nixon’s elimination of the draft in 1973 (although that’s a bit more complicated than it sounds). President Kennedy, however, had promoted the idea that married men should be excluded from the draft, an idea that would shock civil libertarians (especially gay ones) today.

Later, in discussing his second combat deployment, Jacobs espouses a philosophy of risk-taking which suggests that society regards some risk-taking as a necessary virtue to be expected of everyone.

But in the Epilogue, he becomes very critical of the asymmetry in risk taking and hardship bearing that is necessary to maintain freedom. He writes, on p 274, “Like military units and corporations, societies survive only if all its members participate in nurturing it, and the survival of the American democratic experiment is not enhanced by the asymmetrical distribution of sacrifice that we have now.” He sees this is “the” Moral Issue. He calls for universal military service, rather than a return to the draft through “selective service.” This may comport with his background and familiarity with Israel, which has compulsory military service for both sexes (and now accepts gays). It’s important to remember that the Selective Service System is still in business today and ready to go if Congress ever does reinstate the draft.

Shortly after 9/11, in fact, some people called for reinstating conscription. Charles Moskos, who helped author “don’t ask don’t tell”, advocated conscription as a way of making the entire population responsive and attentive to foreign threats, and at the same time backed away from supporting the “don’t tell” policy on gays. Other Senators and congressmen, usually Democrats (ranging from Carl Levin to Charles Rangell) have sometimes called for bringing back the draft, but the Pentagon has opposed it.
Posted by Bill Boushka at 5:57 PM