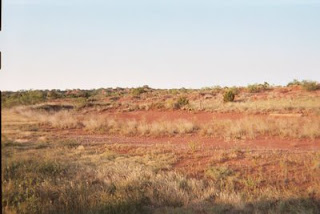 Author John Updike has a big article in the December 2008 National Geographic Magazine starting on p 86 with a stunning “Cinerama” large photograph of the edge of Victoria Crater, apparently taken by rover Opportunity. The magazine says that the dusky red-brown-orange color of the desert scene is very close to what a human visitor standing on the crater rim would really see. The sky seems “cloudy” with dust. There are lots of strewn rocks and smooth columns, fractured naturally. What is missing is greenery. Otherwise, the scene could almost have come from Utah (or even countryside north of Abilene, Texas). But if you stood there the whole planet would be like this (with some occasional ice or dry ice), with only a few rovers or remains from human landers that have reached the planet scattered around the surface. (Sorry, there’s no Extreme Train to tour the landscapes, like in John Carpenter’s 1998 film “Ghosts of Mars”.) For copyright reasons, I can’t just reproduce it on the blog, but you can look at the photo online here. Yes, I encourage the visitor to buy a hard copy.

The backside of the photo has an aerial shot of 2000 foot deep canyon in the polar regions, with some water ice, with some computer-driven colorizing.

The Updike article is called “Vision of Mars: Robot Explorers transform a distant object of wonder into intimate terrain.”