Barack Obama's "Change We Can Believe In" 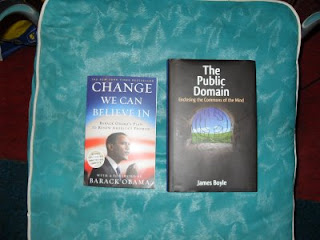 The Inaugural Fest at the site of the Old Convention Center in Washington DC (near Metro Center, through Jan. 24, 2009) sells the little paperback book by Barack Obama and campaign. "Change We Can Believe In: Barack Obama's Plan to Renew America's Promise." The publication information is as follows: “New York: Three Rivers Press, 2008. ISBN 978-0-307-46045-5. 280 pages, paper.”

Part I of the book is called “Hope for America” and appears to be written by his campaign. It comprises several sections: Reviving Our Economy, Investing in Our Prosperity, Rebuilding America’s Leadership, Protecting our Union. It appears to have been written by the campaign staff. Photographs were contributed by Tim Llewellyn, Scout Toufankjian, Mikhail Metzel, Michael Schneider, and David Katz.

The most interesting item is probably his Philadelphia speech, “A More Perfect Union”, where he recalls the history of the Declaration of Independence and writing of the Constitution. He talks about the apparent contradiction or paradox in the American Revolution: it was so idealistic, as emancipating man from false ideas of nobility or hierarchy, and yet it did not embrace all citizens, especially African Americans. Obama has often talked about Lincoln. In this speech, he does talk about the painful questions involved in debating affirmative action, and the possibility that a white person can lose an opportunity for which he or she is better qualified because of historical factors that he or she did not cause. But the greater problem, he says, is that real work and productivity is not rewarded properly anyway; it is exploited by a short term bottom line business value system that rewards non-sustainable behavior.

Most of the platform material was written before the total financial collapse in September 2008, and some of it refers to high gasoline prices. Nevertheless, most of his positions reflect what would happen this fall.

On military issues, he pays heed to the needs of veterans (so did John McCain, of course), job discrimination of returning veterans and reservists, and ending the “back door draft” or stop loss policies. The platform talks a lot about nuclear and biological terror, and recommends policies similar to those propose by Sam Nunn and the Nuclear Threat Initiative. His positions on Iraq and Afghanistan, and now Guantanamo, are all well known.

But on the obvious “other” question about the military, he waits until later, in a brief paragraph on sexual orientation discrimination, to support ending “don’t ask don’t tell”, ENDA, and civil unions, and gay custody and adoptions. Yet, the DADT issue ought to be discussed in the military section, too, as it affects national security directly (especially in the intelligence and linguistics area).

He talks about service a lot, and wants to offer tuition assistance or credits for national service. He says at one point that it takes a man to raise a child as well as to cause on to be conceived. While he talks about deadbeat dads and keeping marriages together (or having parents be married) and present fathers, there is at least a hint that some of the co-parenting ought to come from people who did not have their own children. That fits into the idea of service. But to include LGBT people in this effort and as role models for children, all the legal barriers that cause second class status need to be removed. He ought to connect the concepts of service and “equality” more directly than he ever does.

His views on teaching come find in to this picture. He criticizes "No Child Left Behind" as not giving school systems the resources to carry out their mandates, and talks of dedicated efforts to train teachers. There is a problem in that teaching requires both academic or intellectual excellence and the ability to motivate others in a quasi-intimate way. There is perhaps an inherent personal contradiction involved because one's satisfaction in life must come from the achievements of others, not oneself.

He talks about Internet security, and suggests that some critical infrastructure applications ought to be more shielded from access from the public Internet; but in the issue of protecting minors, he tends to go along with vigorous voluntary and market-based efforts rather than censorship.

The book sounds reassuring to seniors about their social security and Medicare benefits. However, recent statements by Obama suggest a hard look at entitlements, and the idea that seniors with means could get fewer benefits, although those without means would get tax relief. There seems to be a bit of communism in this situation.

The book proposes extending the Family and Medical Leave Act, particularly in eldercare situations, but it really doesn't get into the real controversy, which would be paid family leave. 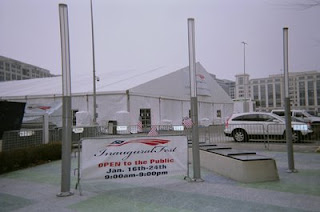