"The Graying of the Great Powers": major study by CSIS 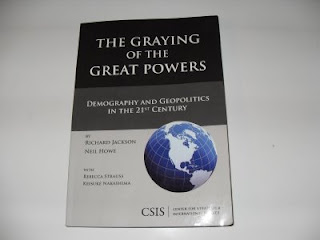 In the past few years, we’ve heard social conservatives talk about “demographic winter” and the danger that declining fertility rates among affluent populations in Western countries will invite aggression from the more religious and socially collective societies in the developing world (some of them associated with radical Islam), to the point that the development undermines western economic stability and democratic or liberal freedoms and governance. I’ve reviewed Philip Longman’s “The Empty Cradle” and Mark Steyn’s “America Alone”, and mentioned Kathtryn Joyce and her critical video, maintaining that all this is a very racist and “old argument” that calls not just for more babies but for “the right babies” (or “more white babies”). Even gay conservative author Bruce Bawer has developed this point in his book “While Europe Slept.” And there was the dark British film “Children of Men” at the end of 2006.

Now there is a formal book from a think tank, the Center for Strategic & International Studies (CSIS) titled “The Graying of the Great Powers: Demography and Geopolitics in the 21st Century” with these authors: Richard Jackson, Neil Howe, Rebecca Strauss, and Keisuke Nakashima. The book is paper, large pages, 216 pages, ISBN 978-0-89206-532-5, with four long chapters.

In a general way, these concerns seem to be valid. In fact, on p 158 the authors quote Philip Longman from Foreign Affairs 83, No. 3, May/June 2004, “The Global Baby Bust”, with “Those who reject modernity would seem to have an evolutionary advantage.”

The authors do progressively nuance their concerns, but in the early part of the book they trace the historical fact that in earlier societies, large populations conferred political strength. This was so much accepted that men were sometimes penalized for not marrying early enough or not fathering enough children, such as in ancient Greece (Philip of Macedon) and China (Mo Zi), or even in Mussolini’s Italy. But after the Enlightenment, at about the start of the 19th Century, Thomas Malthus published his famous “Essay on the Principles of Population,” familiar to most high school civics students now (at least it was discussed in mine back in 1961).

There is a bit of a cultural gap between individualistic societies and religious societies, as well as “Confucian” societies with “Asian values.” Individualistic societies value the performance of the individual outside of the family context and focus on adult expression. There may be more freedom and the appearance of a higher standard of living and self-expression, but it may not be sustainable with external influences, partly because, with less interest in having children, there is loss of personal concern about "generativity" -- what kind of world one will pass on to offspring or the next generation. Confucian and religious societies place more value on the relations in the blood family for their own sakes, and this goes beyond having and raising children; it includes filial piety as well. Faith-based societies usually have higher birth rates. Asian societies are mixed, with the one-child-per-family policy in China, but place more emphasis on inter-family dependency and less on the public sector.

Western society is faced with lower birth rates and longer life spans, especially among non-immigrants. The population replacement in the United States is occurring because minorities tend to have large families but may be more assimilated than in Europe. The authors are moderately optimistic that this bodes well for American "power". Longer life spans mean that retirement must be postponed and that both parents must work. Gender parity and equality in the workplace may actually help relieve the economic strain, but would need to be accompanies for better benefits for families with children, including paid paternal leave (common in many western countries) which non-parents would have to subsidize – a sensitive political and moral issue.

An aging workforce tends to change the attitude toward work. Older workers have more “wisdom” and more “crystalline knowledge” but are less “fluid.” As a result, they may be more conservative and take fewer risks of an entrepreneurial nature. (I don’t think that the record always bears that out; retired people have often started their own businesses.) People tend to reach their maximum productivity in their 30s and 40s, although their maximum pay may occur in the 50s (it did for me).

Smaller families in the West influence social attitudes. Only children or first borns with fewer siblings tend to produce a more “conservative” set of business and competitive values. There could evolve cultural or political complacency that does not respond to the demographic and political “threat” posed by more fecund and for socialized populations. Societies with smaller families will resist war or military adventurism because of the fear of loss of only sons (although that may be a good thing, that the War in Iraq has been so criticized).

The book does not specifically mention the “role” of homosexuality (Steyn did). However, on p 116 in Chapter 3 the authors offer a section called “Changes in Social Mood” and subsections called “Individual Psychology” and “Family Size and Structure”. The authors are clearly concerned that hyper-individualism can lead to an unsustainable notion of personal freedom. As I worked through in the previous book review, gay issues (especially for men) have a lot to do with the desire to decide for oneself (and often express publicly) what one values in people, outside the family, particularly after not being able to compete or fit in comfortably in the family according to conventional biological gender roles (especially procreation). So the findings in books like this have to be a major political concern for LGBT people.
Posted by Bill Boushka at 1:42 PM